I spotted these rock-dwelling crabs along the Pacific coast of Costa Rica in Drake Bay. They were a shiny black color with a lace-like pattern of paler spots, red on the edges of the carapace and on the tips of the legs, and prominent, red eyes. These dark, decorative-looking crabs looked almost like they were carved out of snowflake obsidian. 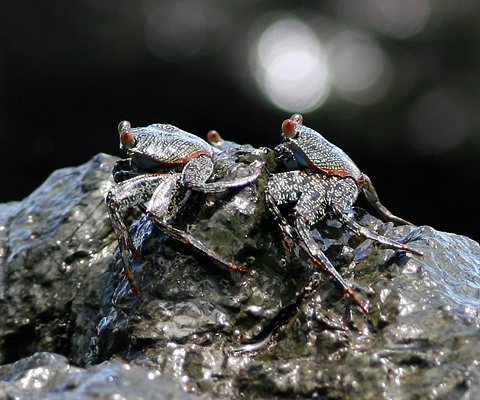 The dark crabs were crawling around on rocks in the littoral or intertidal zone, the area between the low and high tides. These particular crabs have adapted to the constant danger of being washed away by the waves by having an unusually flattened body shape and broad, flattened legs with hooked tips for clasping the rock. When a wave approaches, they will flatten themselves against the rock and hold on tightly. Despite seeing these crabs covered by wave after wave, I never saw one washed away. 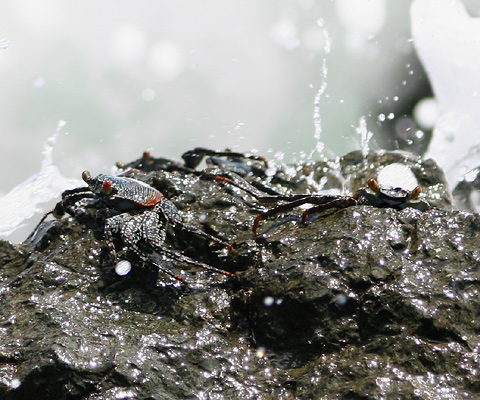 Between the waves, the crabs would deftly scuttle over the rock picking up algae with their small front claws and stuffing it into their mouths. 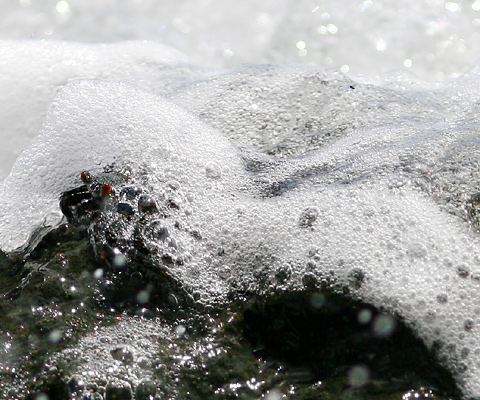 The littoral zone, especially the lower part in the waves, is actually a comparatively safe place for these crabs because the frequent waves help hide them from predators like birds, and large, crab-eating fish will generally stay away from this shallow, turbulent area to avoid being accidentally stranded on the beach or dashed against the rocks by the waves.