During a night hike through the Costa Rican jungle, we spotted this Cat-eyed Snake (Leptodeira septentrionalis) quietly slithering through the trees. 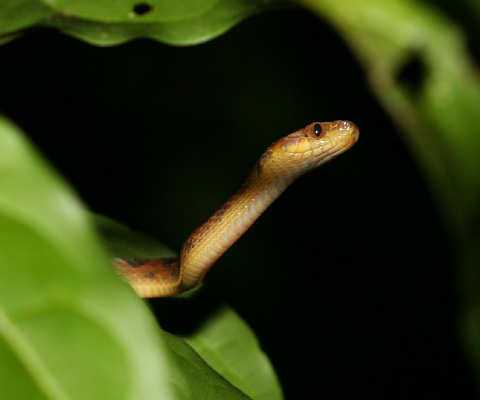 Cat-eyed Snakes are named for their vertically elliptical pupils like those of cats, which they are able to open and contract to adjust for changing light conditions. These nocturnal snakes prefer to gorge on frog eggs, but they will also capture frogs and anoles.

Although they are not a danger to humans, these snakes are often killed because the head of a Cat-eyed Snake is wider than its body, so it can be mistaken for a deadly viper. Cat-eyed Snakes do possess mildly venomous rear fangs, but these fangs are only used on their prey.

Cat-eyed Snakes are slender, light brown to grayish snakes with darker blotches down the middle of the back interspersed with smaller, dark blotches along their sides. These snakes have bulging, brown eyes and can grow up to 35 inches (90 cm) long. 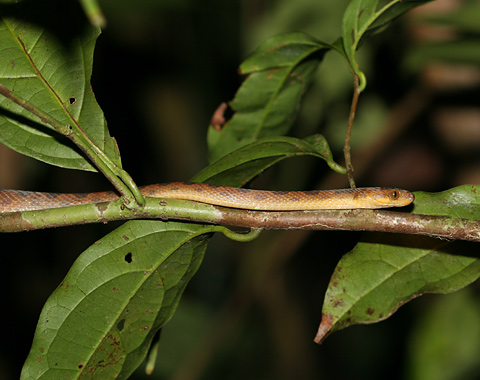 Female Cat-eyed Snakes are able to store sperm for up to four years, which is an advantage for a species with a low population density. Cat-eyed Snakes are found from south Texas to Peru, but they are very scarce in the northernmost part of their range.