Various terrestrial Hermit Crabs (Coenobita spp.) are quite common near the coast in Costa Rica, and these slow-moving land crabs are mainly active at night. This one was perched on a rock outside the door to my room. 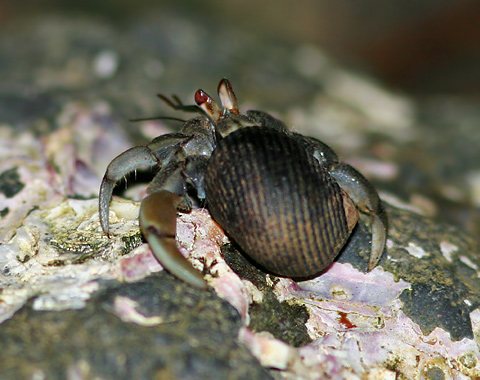 Hermit crabs will use empty seashells as shelters for their soft bodies, and they will retreat back into their shells if threatened, leaving only the hard tips of their claws exposed. As they grow, they will have to find progressively larger shells.

When shell collecting, it is best to determine if a shell is truly empty or you'll end up bringing an unfortunate hermit crab home with you. I did this once as a child, and the poor hermit crab was already dead by the time I discovered it in my shell collection.

I didn't pick up any seashells in Costa Rica because I didn't want any possible trouble with customs (collecting of prohibited species etc.), and besides, all of the best shells I spotted were already claimed by hermit crabs.