Some of the most conspicuous and amusing birds I saw in the Pacific lowland forests of Costa Rica were the brilliantly colored Chestnut-mandibled Toucans (Ramphastos swainsonii), also known as Tucán de Swainson in Spanish. 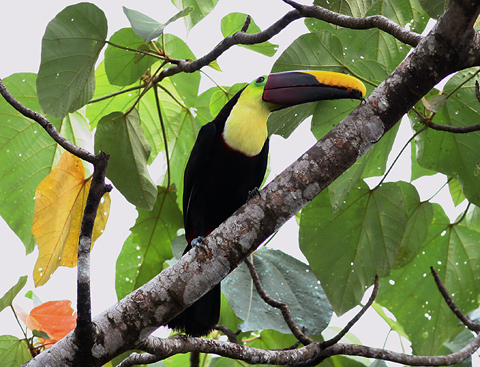 Chestnut-mandibled Toucans are the second largest species of toucan, and only the Toco Toucan (Ramphastos toco) is larger. I had only seen these birds perched or hopping about quietly in zoo cages before, so I had not realized how LOUD they are in the wild. A small flock of Chestnut-mandibled Toucans would call to each other from the treetops in the mornings and late afternoons with much head bobbing and wagging and tail flicking. Some of their calls are a series of shrieking yips, but their most characteristic calls are repeated shrieks that sound like "¡Dios te dé!" or "God keep you!" in Spanish. 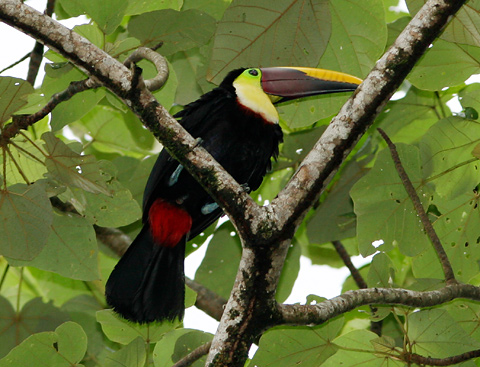 Chestnut-mandibled Toucans are black with a yellow bib, a green ring around the eye, a white rump, red undertail coverts, blue legs and feet, and an up to 7.9 inch (20 cm) long chestnut-red and yellow bill.

Chestnut-mandibled Toucans mainly feed on fruit, but they will also eat insects, small snakes and lizards, along with bird eggs and nestlings. I figured that they must be occasional nest raiders after I saw a flock of screeching Orange-chinned Parakeets (Brotogeris jugularis) furiously attacking a fleeing Chestnut-mandibled Toucan. I couldn't tell if the toucan was carrying anything because their spacious beaks have so much room to carry things in, but those parakeets sure were angry at it.