While walking in a riparian grove of mesquite trees here in Tucson, I spotted a flash of color among the fresh, springtime green of the mesquite leaves. 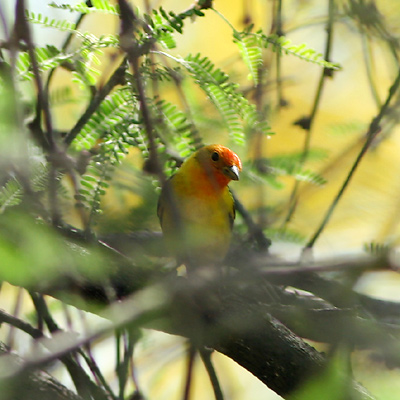 It was a male Western Tanager (Piranga ludoviciana), but I could barely see him amidst the green haze of leaves. He gave me a mildly quizzical look with one dark eye before flying off to even denser cover. Tanagers are some of the most colorful of birds, but they can be difficult to observe because they are often hidden by dense foliage.

Male Western Tanagers are yellow with an reddish orange head, black wings, and a black tail. The females lack the orange head of the males and are duller yellow below and greenish gray above with dark wings and a dark tail.