Limestone is a sedimentary rock and is primarily composed of the white to colorless mineral Calcium Carbonate CaCO3, with varying amounts of impurities that give it color. 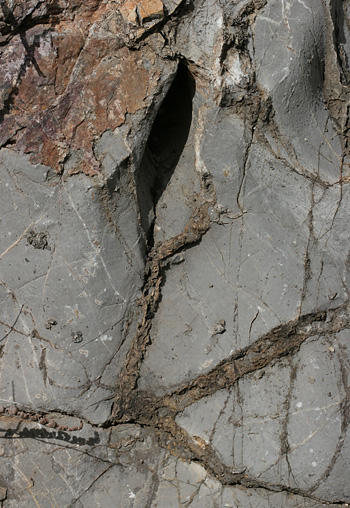 The limestone that I see here in southern Arizona is usually a light gray to brownish color with patches and seams of rough, brown crust. Massive outcroppings of this particular type of limestone are a very good indicator that a cave is nearby.

I photographed this limestone in Cave Creek Canyon here in Arizona, and not surprisingly given the canyon's name, caves like Crystal Cave can be found there. Other caves here in southern Arizona that can be toured or explored are Cave of the Bells, Colossal Cave, Kartchner Caverns, and Onyx Cave.

Limestone is dissolved by acids and will bubble if even mild acids like vinegar are poured on it. The limestone shown below has been partially eroded and eaten away, either by acidic rainwater or water that has become acidic from seeping through the soil and organic matter. 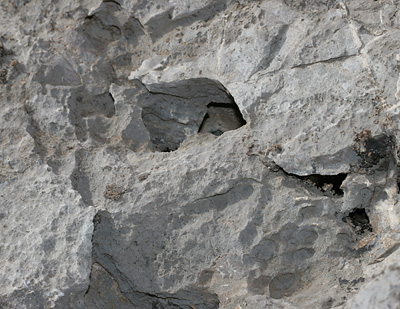 This acidic water will dissolve and carry away the limestone in solution. The dissolved limestone can then be gradually deposited as limestone cave formations (stalactites and stalagmites) as this water trickles through the rock and drips into a cave.