Velvet Mesquites (Prosopis velutina) are one of the most abundant trees in the desert around Tucson. Like many of the desert trees here, Mesquites are in the Pea Family (Fabaceae), which also contains garden peas and beans, and like their cultivated relatives, Velvet Mesquites produce edible seed pods (mesquite beans). 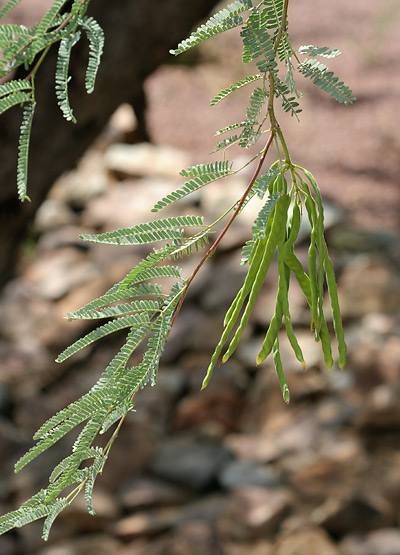 The mesquite beans start out green, but they ripen and dry to a pale yellowish tan color and then drop from the trees. 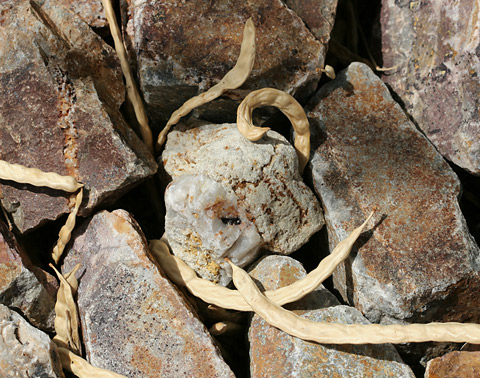 The fallen Velvet Mesquite beans are eagerly consumed by wildlife, and I have seen squirrels, desert rats, rabbits, deer, Javelina, and Coyotes eating them in my yard. Even three of my dogs, the retrievers, love them. My other dog, the Doberman mix is thin and finicky about food and not too interested in mesquite beans. It's okay for a dog to eat a few mesquite beans, but my gluttonous retrievers will consume mass quantities of the sweet, nutty-flavored beans which they barely bother to chew. They eat so much that they vomit them up (always in the worst possible spot). Vomiting is not the only problem, eating huge quantities of mesquite beans can also lead to intestinal obstruction, bloat (torsion), and in one of my dogs, gas in industrial quantities (dogs don't digest whole beans very well). Because of this, mesquite beans in my yard have to be kept swept up and tossed over the fence to keep them away from my voracious retrievers. Luckily, wild animals and even most dogs are far more sensible and enjoy these nutritious, fibrous beans in healthy moderation.

Mesquite beans have long been used by the Indians of the American Southwest, and they formed an important part of their traditional diet. Unfortunately, these Native Americans' adoption of a mostly Western diet has led to serious increases in obesity, diabetes, and related health problems among them, and this has led to a renewed interest in their much healthier traditional foods.

Among their many culinary uses, mesquite beans can be ground into a very nutritious, sweet, dense, high protein, high fiber, gluten-free flour that is far better for people with diabetes than white flour. When harvesting Velvet Mesquite beans, collect the ones on the tree that are yellow and dry with no bug holes. These beans are tough, fibrous and semi-sticky inside, so making flour from them is no easy task. Because of this, I have never attempted it, but delicious mesquite flour (or meal) can be purchased and used in recipes.
I searched around on the web, and I found a number of mesquite recipes.