Once cool October weather arrives, one of the few wildflowers still blooming at the higher elevations in the mountains around Tucson is Common Yarrow (Achillea millefolium). 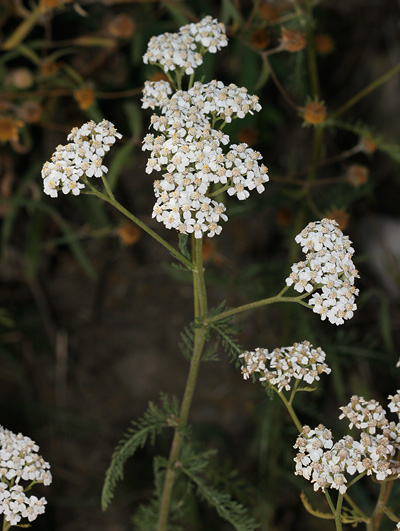 These native wildflowers have soft cream to white flowers and dark green, finely divided, fern-like leaves. Common Yarrows are short-lived perennials and make nice, drought tolerant, low care garden flowers in locations with poor soil and good drainage. In some areas they can be a bit too weedy and so are best grown in contained garden locations.

Common Yarrows are found not only in America, but in Europe and Asia as well. Because Common Yarrows have long been cultivated and this widespread species has many natural varieties, plant breeders have been able to develop ornamental cultivars with a number of different flower colors. In addition to white, cultivated varieties of Common Yarrow can have flowers of yellow, orange, red, pink, gray, or beige.

The pink-flowered Common Yarrows are lovely, but I'm not too fond of the beige ones (skin-colored flowers look creepy). I've never seen the gray-flowered ones, but I wouldn't imagine that there would be a huge demand for gray flowers.