Stink Beetles (Eleodes spp.), also known as Pinacate Beetles, are very common beetles here in Tucson, Arizona and in other southwestern desert areas. These large, black, desert beetles are members of the Darkling Beetle Family (Tenebrionidae). A Stink Beetle will defend itself from predators by first standing on it's head and elevating the tip of it's abdomen. If approached too closely, the Stink Beetle will then exude a foul-smelling, nauseating fluid from defensive glands at the tip of its abdomen. 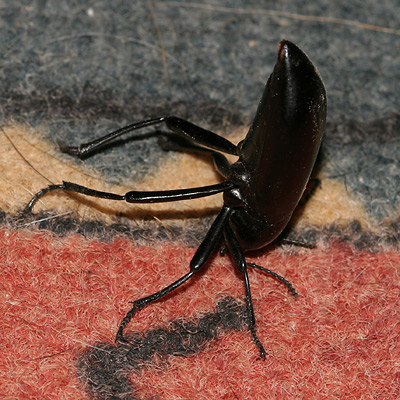 I discovered this Stink Beetle doing an impressive headstand on my dogs' rug on the back porch one evening. Solomon, my Golden Retriever, had been laying on the rug contentedly chewing a bone only moments before. The Stink Beetle must have crawled onto Solomon's rug, assumed stink position on encountering a dog, and driven poor Solomon away. 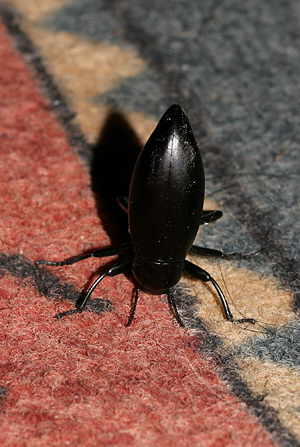 My dogs completely avoid these beetles, and they won't even so much as sniff at one, no doubt from prior bad experiences.