Every suburban bird feeder I've ever seen here in the US is visited by at least a couple Mourning Doves (Zenaida macroura). The sexes are similar, but the males like this one are slightly more colorful with gray-blue crowns and noticeably more iridescence on the sides of their necks. 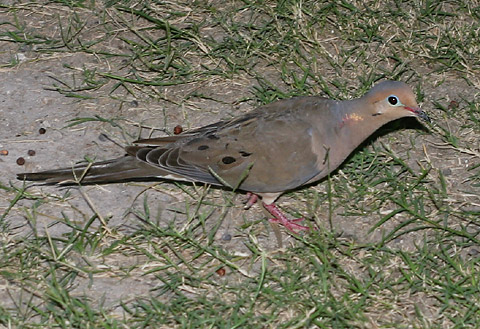 These common, native doves will occasionally nest in hanging or wall-mounted flowerpots under covered porches. A few years ago, a Mourning Dove nested in a potted cactus on the wall near my front window. 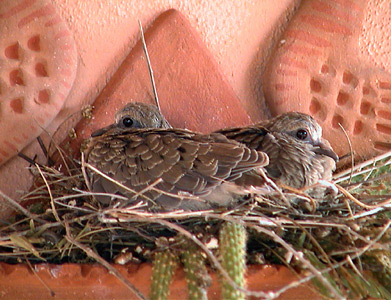 Not only did this nesting spot seem to be uncomfortably spiny for the pair of baby doves, it was also only 4 feet (1.2 m) off of the ground! From observing them over the years, I can say that Mourning Doves are not one of the most intelligent of birds, but they have adapted quite well to the presence of humans and are successful and surprisingly prolific breeders in suburban areas.

Every breeding season, I have one male Mourning Dove strutting around with a puffed up neck, calling mournfully, and generally showing off on the window ledge outside my study for sometimes hours at a time. The male dove seems to be doing this to attract a female, and his efforts are generally successful because he is often joined by a female dove for some flirting (billing and head bobbing) and even mating, but I think that he may also be showing off for his own amusement. He always seems to be watching his own reflection in the window, and he shows off even when there is no female around. I don't know if he knows that the reflection is of himself or if he thinks that it's another rival male dove. 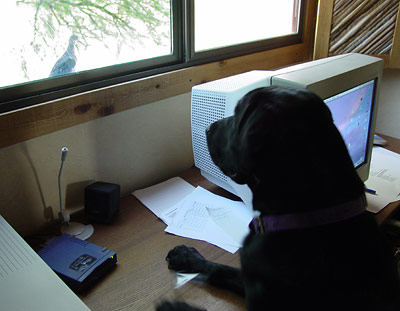 The frequent presence of a male Mourning Dove on the study window ledge drives Sammy, my Labrador Retriever, crazy. Sammy is an obsessive hunter, and when he sees the dove at the window, he'll leap onto the desk and scratch and bite at the window glass in a fruitless attempt to capture the dove. Because of this, I now keep the blinds closed on this window when the male Mourning Dove is out there performing.