Curve-billed Thrashers (Toxostoma curvirostre) are common here in Tucson, and they will happily visit birdseed feeders. They seem to prefer the small seeds like millet. 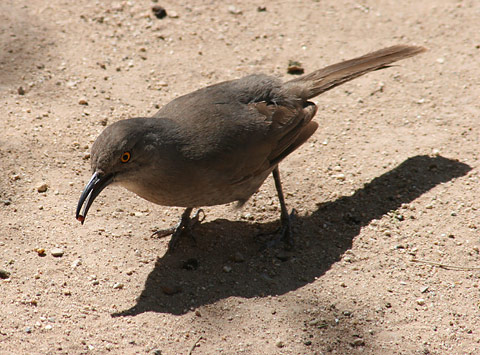 I think that their illicit explorations must make them really nervous because I always seem to find an extraordinary number of bird droppings all over the place after one's been in the house. Because of this, I like to call these birds the "snooper-poopers".

Despite the problems that they've caused me, I really am extraordinarily fond of these inquisitive birds, and I usually have about 10 or so of them in my yard. They adore raw hamburger, and I was even able to get one of them to eat hamburger out of my hand once. They also diligently search the ground around my house for insects and spiders, and I greatly appreciate their natural pest control efforts.

These sharp-eyed birds will use side to side sweeping motions of their curved bills to turn over rocks and leaf litter in their search for insects and spiders. I often hear them rustling about under my windows. Sometimes I'll hear the rustling stop and I'll get a funny feeling at the back of my neck like someone's watching me. I'll turn to look at the window and there one will be intently staring inside. And I know what that Curve-billed Thrasher is thinking; "I wonder what's inside there? I'll have to look for a way in!"