Buffpetal (Rhynchosida physocalyx) are somewhat weedy native plants that can commonly be found growing both in riparian areas and in irrigated areas here in Tucson. They are commonly called Buffpetal due to their buff (pale yellowish) petals. 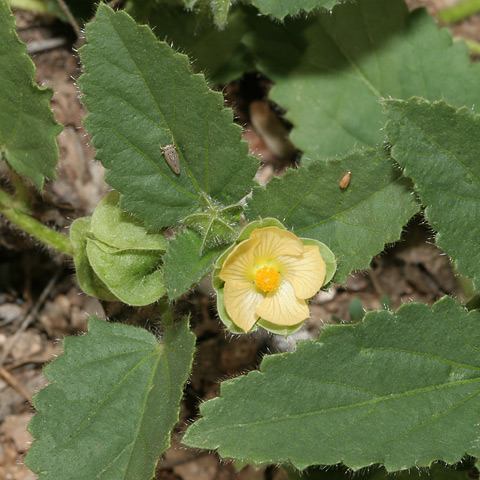 These plants used to be known as Tuberous Sida (Sida physocalyx), but they have now been reclassified into their own genus, Rhynchosida. Buffpetal roots are plump and tuber-like, and at the base of every flower is a large, inflated, green, ribbed calyx.

Buffpetal flowers are VERY frustrating to photograph because they seem to open unpredictably. I found quite a few of these plants in several different places here in Tucson, but the flowers were never open! I checked the flowers over and over at different times of the day and night for days, and the flowers remained stubbornly closed. At one spot, I checked a patch of them at about 6:15 AM and they were all closed. I returned later at 9 AM fully prepared to "operate" on one of the flowers (forcibly open the flower bud and manually spread out the petals) to get a photograph, only to discover that every single flower had opened. Even the smallest Buffpetal plants were covered in open flowers, so I was finally able to get plenty of pictures of them, and I didn't have to perform any flower "operations".