This last saturday, August 28, 2005, my dad and I explored the area near Santa Rita Road in the rolling hills south of Sahuarita, Arizona. There was an unusual amount of traffic on this relatively remote dirt road. We planned to turn off onto Forest Road 485 because my dad's map showed it as a through-road (it isn't). When we got there, we saw signs directing people to Steve's memorial, which explained the unusual traffic. I didn't know who Steve was, but I thought that this area was a beautiful, but unusually remote spot for a memorial.

We then drove south on the very scenic Forest Road 485. 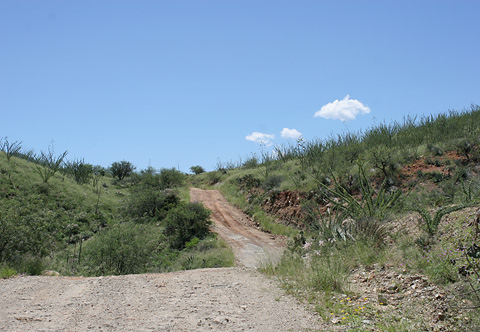 This area, with it's softly rolling, grassy hills is quite verdant in August after the summer monsoon rains. The fields of grass are now a lush green and dotted with with wildflowers. 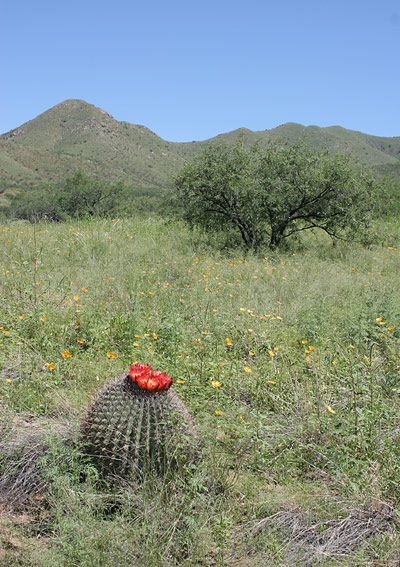 Not only the grass, but all the plants here are green and leafed out like these Ocotillos amidst the agaves and pink-flowered Gatunos. 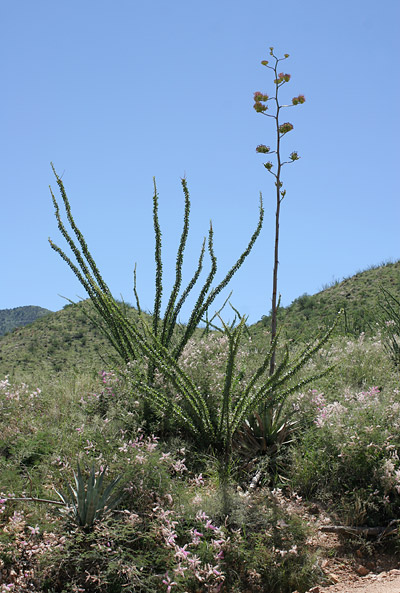 The next day, when I read the Sunday newspaper, I discovered who Steve was and why his memorial was in such a remote location. Steve was Estevan (Steve) Montaño (married with 5 children) and he was found shot to death near this road on August 29, 2004. He was on a bow-hunting trip and was camping by himself when he was murdered at his campsite by an unknown person. The memorial was for the one-year anniversary of his death and was at the site of his murder.

It gives me a creepy, hollow feeling to think that someone was murdered in such a beautiful, peaceful, remote place, especially since the murderer has never been caught and may still live near or frequent this area. This will not keep me from visiting this area again because it is so incredibly lovely this time of year, but I will definitely not go alone!