Thursday night, after I had captured the Western Longnose Snake (Rhinocheilus lecontei) that had somehow made it into the house, I grabbed my camera, a flashlight, and the trash can containing the snake and headed out to a nearby desert wash lined with thick, dead grass. I figured that this would be a good place to release this nocturnal snake because the wash had nice, soft soil for digging and plenty of dead grass to hide in.

I was a bit nervous walking around in the desert at night because of the chance of seeing a rattlesnake, so I carefully shown my flashlight around looking for snakes as I walked down to the wash. Once in the wash, I let the Western Longnose Snake go and took a few photographs of it slithering around in the dead grass.

As I was photographing the snake, I heard rustling in the dead grass right behind me. I whirled around and shown my flashlight on the grass fearfully expecting a rattlesnake, but instead I saw this little, desert mouse. 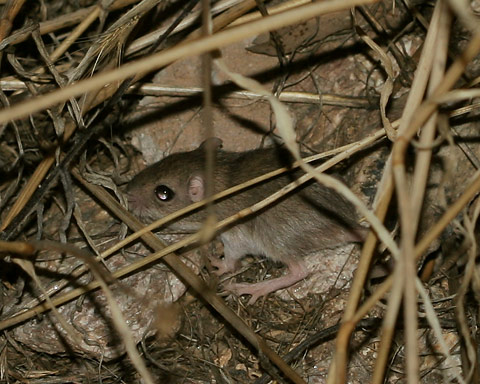 The mouse was acting very strangely, repeatedly scampering up to me and then racing away. I looked down and saw this mouse-sized hole next to my foot. 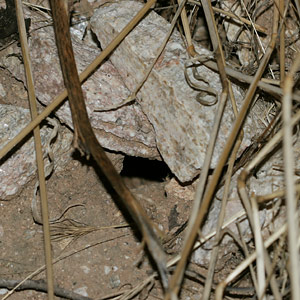 I had frightened the mouse, and it wanted to flee to the safety of its hole, but I was just too close to the hole. Two fundamental instincts, run away from potential predators, and go hide in your hole when threatened, were in conflict, which caused the conflicted mouse to run erratically back and forth. When I moved away, the mouse fled into it's hole, only to pop right back out again. The Western Longnose Snake had moved closer to the mouse's hole, and when faced with a snake, rodents like this small mouse will leave their holes rather than be trapped in them by a snake. The frightened mouse now moved randomly around in the dead grass looking at me and then at the snake. After the snake had finally crawled away, the relieved mouse dove into it's hole, and I went back into the house.