Last night, we finally had some lightning, thunder, and a little blessed rain here in Tucson. The heat has been miserable, not only in its intensity, but also in its monotony, day after cloudless day of 100 °F (37.8 °C) plus temperatures. Even tough, desert plants like Engelmann's Prickly Pears (Opuntia engelmannii) and Arizona Pencil Chollas (Opuntia arbuscula) are becoming yellow and shriveled with the lack of rain. The summer monsoon rains usually arrive here in Tucson in early July. 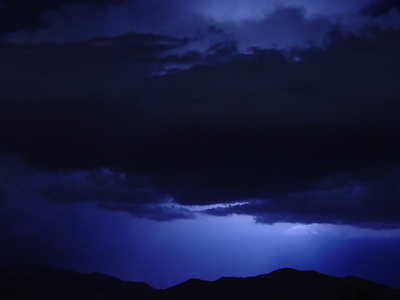 Tucson's summer rainy season is called the monsoon season because it involves a pronounced shift in the weather pattern. In midsummer, subtropical moisture begins to flow from the south into Arizona from Mexico, which when combined with the heat of the desert, causes almost daily, scattered afternoon and evening thunderstorms. The Arizona monsoon season usually lasts for a couple of months or so. I don't know if this was just an early storm or the start of the monsoons, but I hope the thunderstorms return soon with their needed rain!

Unlike me, two of my dogs are definitely not looking forward to the start of the monsoons. Solomon, my Golden Retriever, and Bounder, my Doberman Pinscher mix, are terrified of thunder. Solomon hid under my desk, and Bounder hid in my closet during last night's storm, and he refused to come out for hours after the storm. Perhaps, with his canine hearing, he could hear the rumbling of distant storms that were beyond my human perception. 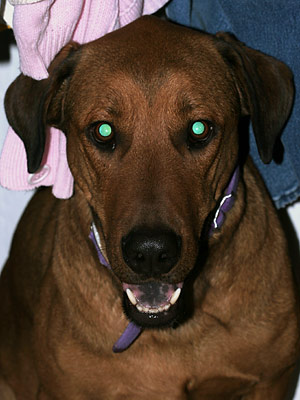 Bounder's pupil's were dilated both with fear and the darkness of the closet. The eyes of many animals such as dogs will reflect yellow, green, or other colors in flash photography because their eyes contain a special layer behind the retina that reflects light back to the retina. This additional reflected light improves their vision in low light conditions. This reflecting layer is called the tapetum lucidum (bright carpet in Latin) and it's something that humans do not have.

Red-eye is a common problem with flash photography of humans because, with no tapetum lucidum layer to block it, the light reaches the blood-rich region at the back of the eye and causes a brilliant red image of it to be focused back through the lens of the eye, giving even the nicest people red, glowing, demonic eyes in flash photographs.

For more photos of animals with differently colored glowing eyes, see my entry about eye shine.