It's early July, and it is terribly hot outside, just too hot to go hiking or exploring around at lower elevations. I visited Molino Basin Campground today, but only stayed for a short while because my dog Bounder became too hot and tired to explore anymore.

Even though we didn't stay very long, I did see one wild animal at the campground. As we were walking in the shade of the oak trees, a squirrel began giving its loud, chirping alarm call from the top of a hollow tree. 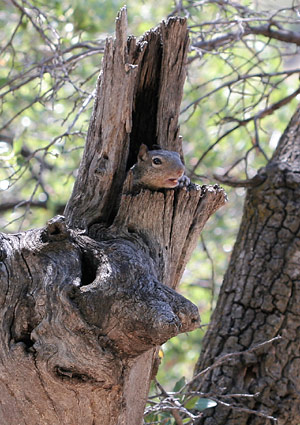 Bounder immediately went to coyote alert status and became rigidly alert with a partly raised ruff. Around our house, squirrels will give similar alarm calls when they see a coyote, and my dogs have cleverly learned what these squirrel calls mean. My dogs HATE coyotes and will begin barking furiously when they hear a squirrel alarm call, even if no coyote is in sight. Bounder never did see the coyote the campground squirrel was warning about because he was the "coyote" that the squirrel was upset about.