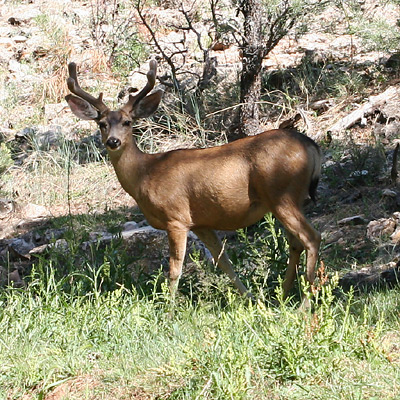 Only male Mule Deer, like this well-fed buck from northern Arizona, have antlers. With less lush grass to eat here, the Mule Deer in the Tucson area often appear thinner. In June, My dad and I spotted the Mule Deer below in a dry, grassy area while we were driving along the rough and rocky Bellota Ranch Road east of Tucson. 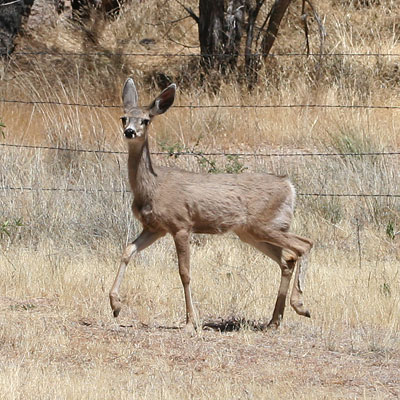 We had my dog Bounder with us and he was extremely excited at the sight of the deer. He'd never seen deer before, and he wasn't initially sure if they were good (prey), bad (predator), or neutral (people or other similarly uninteresting animals). He quickly decided that they were very good, and he desperately wanted to get out of the car and go chase them. When we wouldn't let him out, he began whining non-stop and frantically rushing about the car trying to find some way out. Seeing and hearing the canine commotion in our car, the deer wisely decided to leave and trotted away into the bushes, but being Mule Deer, they kept their tails lowered as they fled.