When I or my dad find a snake or tortoise in the road, we stop if we can safely do so and shoo the animal off the road to safety. Unfortunately, some people will deliberately run over animals in the road, especially snakes, so we try to get the animals completely off of the roadway. I have rescued two Desert Tortoises and several snakes from roads. I don't really fear most snakes, but I don't pick them up or touch them because even non-venomous ones may bite.

My dad and I saw this plump-looking Gopher Snake (Pituophis catenifer) in the middle of Prison Camp Road, and my dad got out of the car to get it out of the road.

My dad stomped on the road near the snake and kicked sand at it. The Gopher Snake became enraged and arched its upper back, puffed itself up, and began hissing loudly. The Gopher Snake's strange, rattling hisses sounded like a rattlesnake rattling. The Gopher Snake reluctantly left the nice, warm, dirt road where it had been sunning itself and angrily slithered off into the bushes where it would be safe from four-wheeled snake killers. 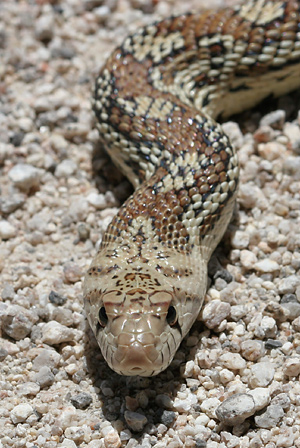