The University of Arizona has lists of some common plants and trees known to produce allergenic pollen here in southern Arizona. Allergenic ragweed pollen is a major cause of allergies in Tucson because ragweeds (Ambrosia species) are both numerous and common here. Ragweeds are anemophilous (polinated by the wind) so their pollen is very small and light.

One spring, when the Triangle Burr Ragweeds (Ambrosia deltoidea) were in bloom, I was photographing desert wildflowers in Saguaro National Park West, and I kept accidentally brushing against these small, green-flowered shrubs which are very common there. Even the lightest touch of these plants caused visible clouds of their allergenic pollen to be sent airborne, causing me to sneeze repeatedly and making my eyes water so badly that I looked like I was weeping over the lovely, spring wildflowers. 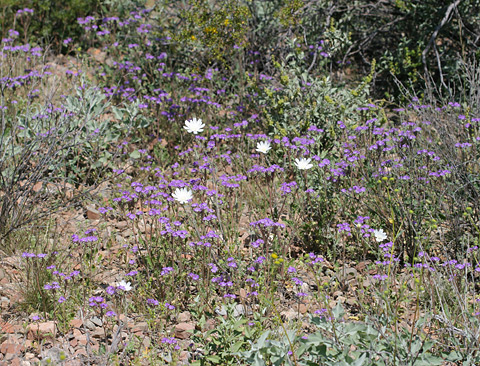 Pollen causes allergic reactions because the body's immune system mistakes it for a virus or bacteria, and the immune system then causes histamine (and other substances) to be released in response. The histamine release triggers allergic symptoms (coughing, sneezing, watery eyes) which are meant to expel the virus or bacteria. Antihistamines (a common allergy medicine) block the actions of histamine and thus prevent the allergic response.