Flowers with more than the normal number of petals are known as double flowers. Roses and many other types of cultivated flowers are double-flowered, but occasionally double flowers can also occur in wild plants, like this Stansbury Cliffrose (Purshia stansburiana). 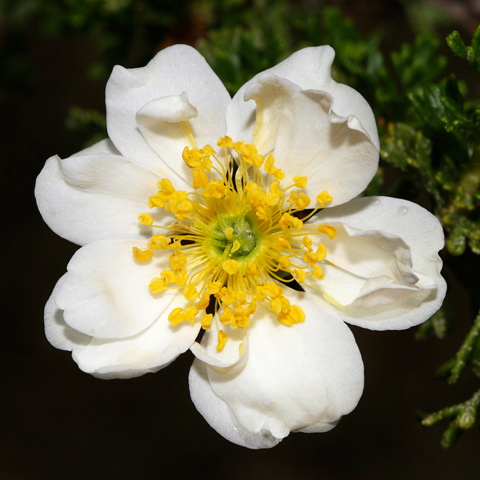 I observed this rare double-flowered Stansbury Cliffrose in Arizona's Santa Rita Mountains. This attractive and fragrant member of the Rose Family normally has flowers with five petals, but this one has more than twice that. Double flowers are caused by a genetic mutation in the plant that causes stamens (male reproductive structures) and less commonly carpels (female reproductive structures) to develop instead into petals. If all the reproductive parts of the flowers are replaced by petals, then the flowers are sterile and the plant can only be propagated asexually through grafts and cuttings.

Stansbury Cliffrose flowers are bisexual with both male and female reproductive structures. Fortunately for this plant, its double flowers remain quite fertile and still have several plump, green pistils surrounded by a fringe of numerous yellow stamens.

The double mutation in this particular plant has caused some of its stamens to develop wholly or partly into petals, but since it has so many stamens to begin with, its fertility hasn't been much reduced. Some of these extra petals look quite normal, while others are a weird blend of petal and stamen. This weird blending is quite noticeable on the top two inner petals, which are half white petal and half yellow anther filament.