Reddish Potato Beetles (Leptinotarsa rubiginosa) are found in Arizona, New Mexico, Texas, and Mexico. On a sweltering August day, I observed this one quickly crawling along a shady wash along Arizona's Sycamore Canyon Trail near the Mexican border. The busy beetle absolutely refused to stay still and I thought that its colors would look better in sunlight, so I captured it and put it on my water bottle, which I then held at arm's length in the sunlight to photograph. The surface of the water bottle was a bit unfamiliar to the beetle, which slowed it down enough to photograph. 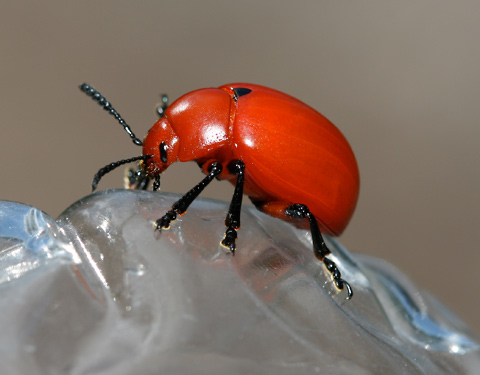 Reddish Potato Beetles have a scarlet head, pronotum (plate behind the head), elytra (wing covers), and undersides, a small, black scutellum (triangular plate on the back), black antennae and mouthparts, and solid black or red and black legs. The sexes are similar. These beetles are plump and their general shape is somewhat like that of a June Beetle.

The bright red and black colors of a Reddish Potato Beetle make it very easy to spot by both humans and predators, but these colors actually help protect this beetle because they are a form of aposematic (warning) coloration meant to warn potential predators that it is poisonous, perhaps because of the poisonous plants it eats.

Like many other Potato Beetles (Leptinotarsa spp.), both the adults and the larvae feed on the leaves of solanaceous plants, specifically those of some Nightshades (Solanum spp.) and Groundcherries (Physalis spp.) that can grow in part shade since Reddish Potato Beetles quite sensibly prefer shade in the summer heat of the Southwest.