Dead-leaf Moths (Oxytenis modestia) are large, but amazingly well-camouflaged moths found from Guatemala down to the northern half of South America. I observed this male Dead-leaf Moth outside of my hotel room one stormy May night in Manuel Antonio, Costa Rica. This moth looked so much like all the dead leaves scattered about from the storm that I would have never spotted him if he wasn't resting on the wall. 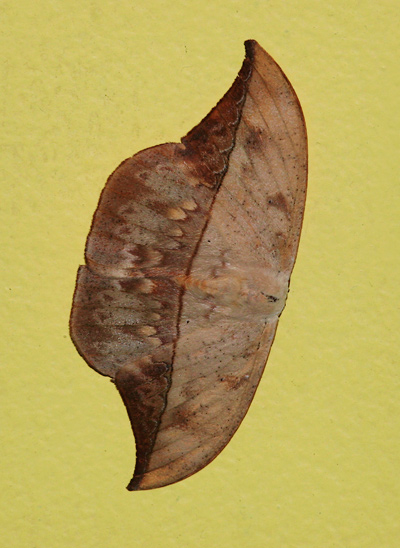 Dead-leaf Moths are yellowish below and varying shades of mottled brown above with leaflike veins and a dark, leaflike "midrib" from the tips of the forewings across the hindwings. The head and legs are hidden on the underside of the body, and the body itself is colored like the wings. The sexes are easy to distinguish because the males like this one have concave forewings, while the females have convex forewings, giving them an even more leaflike appearance than the somewhat oddly-shaped males. Dead-leaf Moths show seasonal color differences, and those from the dry season are a lighter brown color (like dry leaves) and those from the rainy season are a more mottled, darker brown color (like wet, mouldering leaves). To further its leaf impression, a Dead-leaf Moth will gently flutter to the ground like a falling leaf if it's disturbed.

Adult Dead-leaf Moths are not the only ones that have clever adaptations to avoid predation, their caterpillars do as well. The young caterpillars look unappetizingly like seed-filled bird droppings, and the older, last instar caterpillars look like fat, green snakes with large, false "eyes" that they are able to open and close at will. If threatened, these snake mimic caterpillars will open their black and yellow "eyes", inflate their head, and wave around menacingly like a snake about to strike. The caterpillars feed on the leaves of plants in the Madder Family (Rubiaceae) like those of the edible fruit tree Jagua (Genipa americana), so check for caterpillars if you see one of these trees.