Red-billed Pigeons (Patagioenas flavirostris, formerly Columba flavirostris) are tropical pigeons found in woodland areas from southern Texas to Costa Rica. In May of 2007, we spotted several Red-billed Pigeons in a palm tree in Alajuela, Costa Rica. We first heard their "Cooc cu cu coooo!" calls coming from the palm tree and then easily spotted these large, conspicuous pigeons. 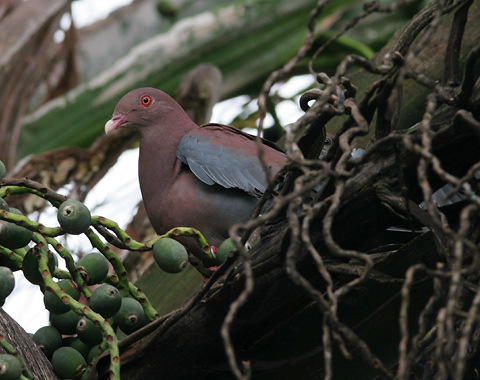 Adult Red-billed Pigeons have a dull, reddish purple head, breast, and shoulders, a slate gray belly, rump, tail, and wings, magenta legs, orange eyes with a red eye-ring, and a distinctive yellowish white bill with a pinkish red base and cere. The sexes are similar, but the males are a bit more richly wine-colored. Unlike these pigeons with their white and red bicolored bills, other similarly colored species of pigeon like the Ruddy Pigeon (P. subvinacea), the Short-billed Pigeon (P. nigrirostris), and the Pale-vented Pigeon (P. cayennensis) all have dark bills. Young Red-billed Pigeons are more dully colored and have dark eyes and a dark bill. 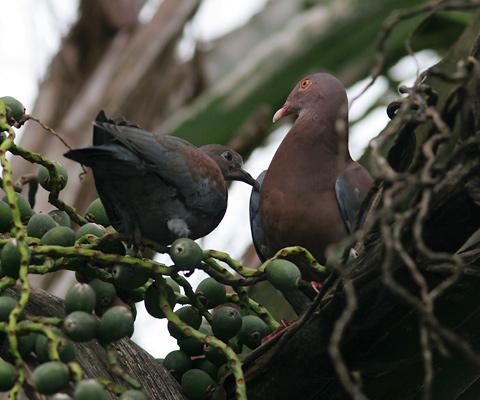