There are quite a few venomous creatures here in Arizona, and one of the most impressive is the Arizona Giant Centipede (Scolopendra heros arizonensis). These huge centipedes can grow to over 8 inches (20 cm) long. This unique-looking Arizona subspecies can be identified by its black head and tail, red or orange body, and yellowish legs. Other subspecies are red-headed or yellowish. This small, young Arizona Giant Centipede below was hiding under some trash cans on my Tucson, Arizona back patio one summer evening. 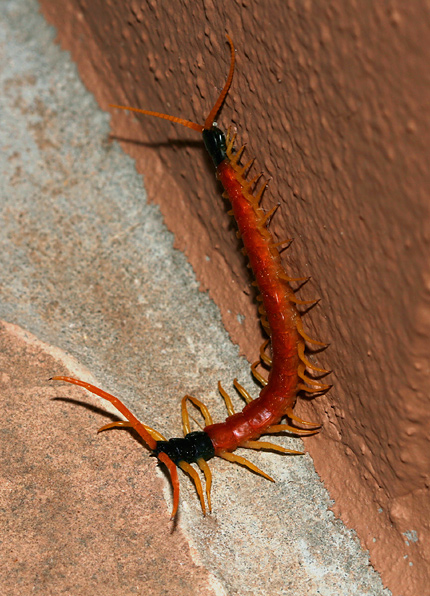 The bold orange or red and black colors of an Arizona Giant Centipede are a form of aposematic (warning) coloration meant to scare away potential predators. Along with their venom and universal warning colors, Arizona Giant Centipedes have another defense against predation, a posterior pseudohead similar in color and appearance to their actual head. The pseudohead even has what appears to be orange antennae like the real head, but these posterior "antennae" are actually modified legs. Arizona Giant Centipedes can move quickly either forward or backward, and if a predator mistakenly grabs the more expendable headlike tail, the centipede can rapidly bend around and attack it with its venomous front legs. In the above photo, the centipede's true head is the one higher up on the wall.

My cats once captured and killed a huge Arizona Giant Centipede in my garage, but thankfully they weren't harmed. I was horrified to see the cats flipping the monstrous centipede around and batting at it, and I hurriedly took it away from them. I tossed the dead centipede over the fence, and it quickly disappeared, so either some bird or animal carried it off or it had just been playing dead (ugh).

Arizona Giant Centipedes are nocturnal, hiding in dark, moist areas during the day and emerging on warm, humid nights to hunt for other invertebrates. Here in the Sonoran Desert, they are most often seen during the summer monsoon rainy season when the humidity is higher and bugs are plentiful.