Gilded Flickers (Colaptes chrysoides) are large woodpeckers found in desert areas in southern Arizona, southeastern California, and in northwestern Mexico. In June of 2008, I observed this adult male Gilded Flicker below and his family in my Tucson, Arizona yard. 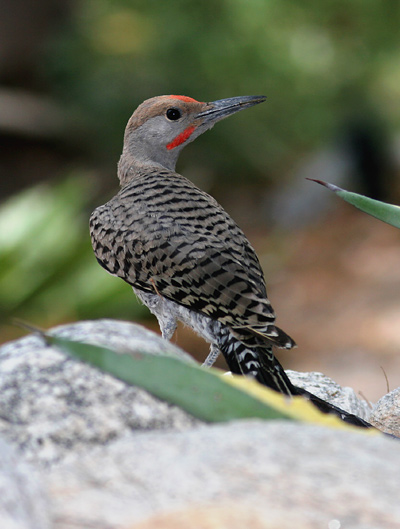 The Gilded Flickers had nested in a cavity in a nearby Saguaro, and after their young had fledged, the parents brought them to my yard in search of food, water, and shade. Gilded Flickers mainly feed on ants and other insects, but they will also feed on fruit, seed, flower nectar, sugar water in hummingbird feeders, and on dry dog and cat kibble (one of their favorite foods).

Gilded Flickers are brown with black bars above and whitish below with black spots, and they have a brown crown and nape, a gray face, dark eyes, a blackish bill, a black, crescent-shaped mark on the chest, a white rump visible in flight, and golden yellow on the undersides of their wings and tail. The sexes can easily be distinguished because male Gilded Flickers have a red malar patch (a mustache or whisker mark) extending from the beak. The males may also have red on the forehead.

Immature Gilded Flickers look similar to the adults. Although this immature male Gilded Flicker below looked like his father, he was very easy to distinguish because of his demanding, babyish behavior. 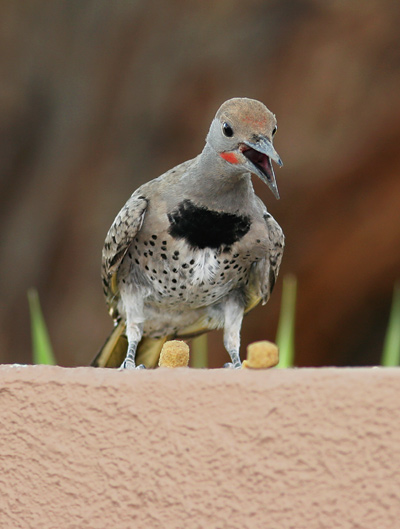 Gilded Flickers have an ear-piercing shriek, and this immature male Gilded Flicker would sit outside of my window shrieking annoyingly until I put out dog food for his parents to feed to him. The parents had quite a time with this one problem child. He was aggressive toward his sister, and I once saw him viciously bite her and throw her off a wall. I also saw him hop up and kick his mother hard with both feet when she ignored his demands to be fed. His poor father was the most patient with him and didn't react aggressively when the son shrieked in his face or grabbed his tail feathers. Thankfully, a full stomach of dog food would temporarily calm the problem child, and then the father (and the rest of us) could get a little peace and quiet.