With their beautiful metallic green coloration, large size (more than 1 inch or 2.5 cm long), and loud, buzzing, bumblebee-like flight, Figeater Beetles (Cotinis mutabilis, formerly C. texana) are some of the most conspicuous beetles found here in the Sonoran Desert. Adult Figeater Beetles emerge in the summertime, and they are especially common during the wetter, more humid summer monsoon season in July and August. In July of 2007, I used a mesquite bean to rescue this lucky Figeater Beetle out of a Tucson, Arizona swimming pool. 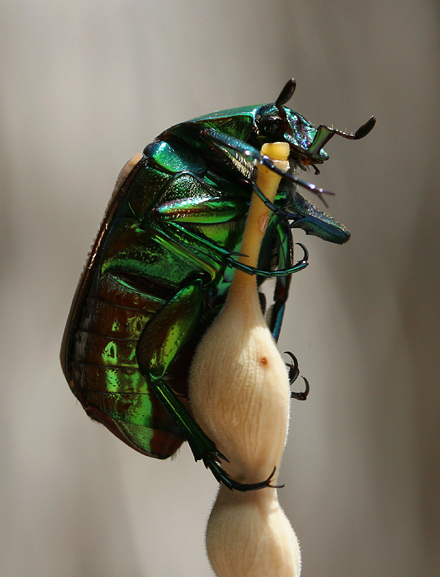 The Figeater Beetle remained perched on the mesquite bean just long enough for me photograph it before it took flight and disappeared into the trees. The Figeater Beetle must not have been in the pool long before I found it because it certainly didn't need much time to dry off. 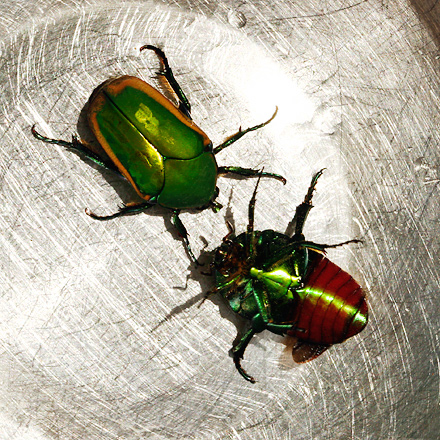 Figeater Beetles are a matte metallic emerald green above with broadly tan to yellow-edged elytra (wing covers). Below, Figeater Beetles are overlaid with bright, shiny green iridescence. Green June Beetles (Cotinis nitida) look very similar, but they are mainly found in the eastern half of the U.S. and have noticeably browner and bronzier green elytra. Figeater Beetles are members of the Scarab Beetle Family (Scarabaeidae), and they have the classic scarab shape. However, unlike many other scarab beetles, which are drably colored and nocturnal, the colorful Figeater Beetles are active during daylight hours.

Unfortunately, Figeater Beetles are not only fond of sweet tree sap, they will also chew into nectar-filled flowers and feed on a variety of fruit, making them a pest. Although Figeater Beetles can be found feeding on many types of bird-damaged and over-ripened fruit, they are only able to chew into and damage softer, thin-skinned cultivated fruits like figs, peaches, apricots, nectarines, plums, grapes and native fruits like those of Saguaros and Cactus Apples. The best way to control adult Figeater Beetles is to cover, screen, or remove the manure, compost, thick mulch, or heavy leaf litter that provide food and shelter for their larvae. Figeater Beetle larvae are fat, white grubs, and since these plump morsels are absolutely adored by birds, any unearthed grubs will quickly be snatched up and devoured by them.