Gila Monsters (Heloderma suspectum) are large, colorful, venomous lizards native to the deserts of the southwestern U.S. and northern Mexico. They are the largest native lizard found here in the United States and are one of only two species of dangerously venomous lizard, the other being the Mexican Beaded Lizard (Heloderma horridum), which is found in Mexico and northern Central America. Gila Monsters are generally found in desertscrub habitat and in rocky areas, especially on slopes and foothills with Saguaros (Carnegiea gigantea) and small desert trees like Yellow Paloverdes (Parkinsonia microphylla). Gila Monsters are listed as near threatened by the IUCN because their populations are slowly declining due to habitat loss and degradation and deaths on roadways. They are protected here in Arizona, and it is against the law to harm or capture these attractive, but venomous lizards. 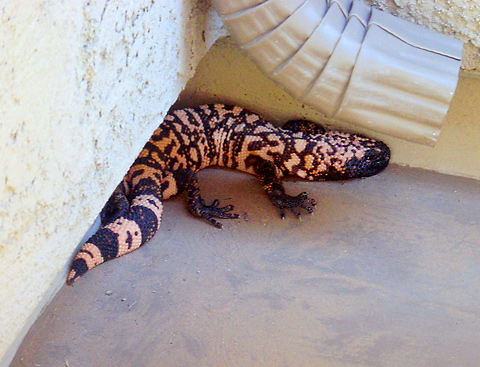 Gila Monsters are large, up to 22 inches (56 cm) long (14 inches or 36 cm from nose to vent). The males are larger than the females. Gila Monsters have a black, snake-like tongue used for smelling out prey, a large head, a stout body, heavy limbs, big feet with powerful claws for digging, and a plump tail used for fat storage to sustain them throughout the year. Their skin is covered with hard, bead-like scales in a banded or reticulated (net-like) pattern of black and orange, yellow, or pink. 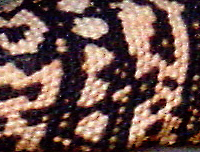 Gila Monsters have venom glands in their lower jaw and grooved teeth that allow their venom to flow into a bite. A Gila Monster will bite down hard on its prey or a predator and then relentlessly chew the venom into the wound for up to several minutes. A biting Gila Monster can be removed from a person or a pet by prying its mouth open with a strong stick or something similarly sturdy. Fortunately, Gila Monsters are not aggressive towards humans unless they are picked up or otherwise handled, and although extremely painful and capable of causing symptoms like vomiting, weakness, and fever, Gila Monster bites are generally not thought to be fatal. The wound from a Gila Monster bite should be thoroughly washed and checked for broken off teeth, and anyone bitten should make sure that he or she has had a tetanus shot.

Since they are large and often sluggish, Gila Monsters are relatively easy to capture, but once captured, these powerful lizards can surprise their captors by quickly bending around and biting them. Not only are Gila Monsters unaggressive if left alone, these venomous lizards are also rarely encountered, not only because of their declining numbers, but also because they spend the vast majority of their time in their underground burrows.

I have only seen two Gila Monsters here in Tucson, Arizona. One was a large, orange and black dead Gila Monster run over by a car on River Road, and the other was a small, very much alive, yellow and black Gila Monster that I found leisurely swimming around in my pool one morning (yes, Gila Monsters can swim). I managed to scoop the swimming Gila Monster out of my pool with a net just before my Golden Retriever was able to grab it, and when I let the furiously hissing and gaping Gila Monster go outside of my fence, it waddled down a rodent hole before I could get a photograph of it.

Fortunately, another Arizona resident, Chuck Harris managed to not only photograph, but also film a Gila Monster that had wandered into the courtyard of his home in Solera at Johnson Ranch, Queen Creek, Arizona in June of 2007, and he has graciously allowed me to use his photos and videos.

The Gila Monster had visited a few neighbors before finally showing up in Chuck Harris' courtyard, and once inside the courtyard, the snoopy Gila Monster wandered around flicking its tongue out and nosing around for anything interesting.

The nosy Gila Monster even tried to find a way inside through a door, but luckily the door was closed.

The wandering Gila Monster eventually got tired of exploring and settled down in a corner for a nap. Three Gambel's Quail (Callipepla gambelii) chicks foolishly approached the Gila Monster while it was sleeping, but they ran off before anything unfortunate could happen (Gila Monsters will happily devour baby birds). 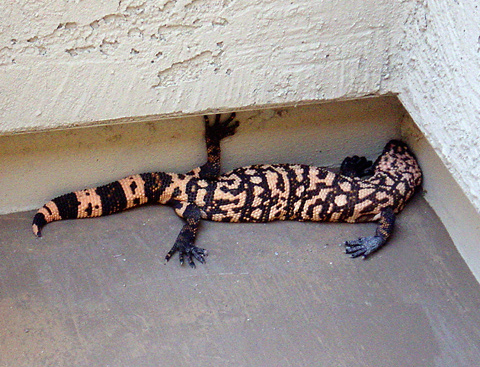 Gila Monsters feed mainly on baby rodents in their burrows, as well as on lizards and the eggs and young of ground-nesting birds. Ground Squirrels, Packrats (Neotoma albigula), and desert mice and rats are abundant here in the Sonoran Desert, especially during the spring and summer, and predators like Gila Monsters and snakes can help control their numbers. Not only are Gila Monsters beneficial for rodent control, Gila Monster saliva was used to develop an injectable drug known as Exenatide or Byettaï¿½ for the management of Type 2 Diabetes.