Belted Kingfishers (Megaceryle alcyon, formerly Ceryle alcyon) are fairly common transients and winter residents at lakes and ponds here in southeastern Arizona. These kingfishers begin showing up here in mid-August, and they will depart northward in early April. We spotted this lone, wintering male Belted Kingfisher near a golf course pond/water hazard at the Tucson Country Club here in Tucson, Arizona on December 25, 2006. Wintering Belted Kingfishers are generally solitary, so it was not a surprise that we only saw this one. 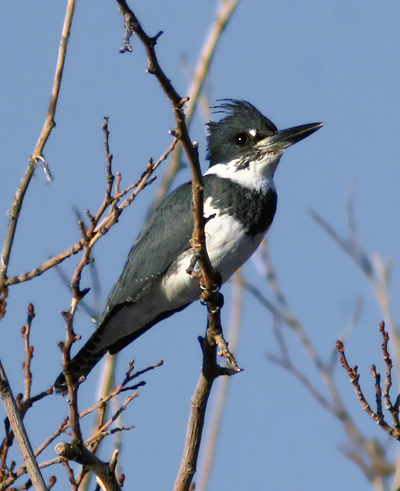 Even though he was all by himself, this Belted Kingfisher was plenty loud enough for several birds. We first noticed him after he began loudly screaming and rattling at an immature Cooper's Hawk (Accipiter cooperii) that we'd flushed out of a tree. Even long after the hawk had disappeared, the furious Belted Kingfisher kept flying from treetop to treetop scanning for the hawk and loudly yelling about it the whole time. He would only quiet down briefly and give us an annoyed glance when we approached him, but he was soon off to another treetop lookout in his noisy search for the hated hawk. Cooper's Hawks mainly prey on other birds, so birds quite rightly fear and despise them. Ironically, although they mainly prey on fish and other aquatic creatures, Belted Kingfishers will themselves occasionally capture and eat young birds.

At around 1 foot (30 cm) in length, Belted Kingfishers are relatively large for a kingfisher, and they have a slaty blue head and back, a white collar, a band of slaty blue across the breast, a ragged head crest, and the large head and powerful, dagger-like bill typical of a kingfisher. Adult male Belted Kingfishers like this one have a white chest and flanks, while the females and juveniles have a rusty red chest band and flanks.