Cockatiels (Nymphicus hollandicus) are native to Australia, but these small parrots are popular as pets in many other countries. Based on the number of escaped Cockatiels that I've seen out in the wild, quite a few Cockatiel owners don't keep their bird's wings clipped. I see and/or hear several escaped Cockatiels a year here in Tucson, Arizona.

I observed this escaped male, wild-type Cockatiel below in my Tucson yard in March of 2007, and later in June of 2007, I spotted a small flock of Cockatiels not that far away in the area just south of E. Catalina Highway and E. Tanque Verde Road. 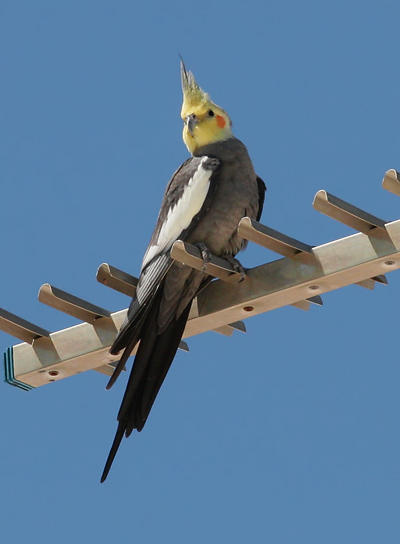 I first spotted this male Cockatiel perched at the edge of my swimming pool and staring longingly at the water. My dogs chased the Cockatiel away from the pool (nearly capturing it), and the frightened bird flew up onto my television antenna. I put my dogs inside and the thirsty Cockatiel then returned to the edge of my pool. The thirsty bird was unable to figure out a way to drink from the pool, and he didn't seem to know what the many birdbaths around my yard were for. This, and the fact that he let me approach him very closely (but not quite close enough for me to capture him), indicated to me that he had been someone's pet and was only a very recent escapee. The Cockatiel finally gave up on the pool and flew off. I never saw him again, which may be a good thing because my yard is really not safe for unwary, inexperienced birds like this one with all of the Cooper's Hawks and other bird predators (like my bird-hunting dogs) that frequent my yard.

Cockatiels like this one are easy to recognize and have a pointed, feathered crest on their head, a curved, hooked beak typical of birds in the Parrot Family (Psittacidae), and a long, pointed tail. Wild-type or normal gray Cockatiels like the one above are mostly gray with white-edged wings and an orange ear-patch. Wild-type males have a yellow face and crest, a bright orange ear patch, and solid black under the tail, while the females have a grayish face and crest, a dull orange ear-patch, and yellow with black barring under the tail. Captive-bred Cockatiels do have a number of different color mutations, but most of the escaped Cockatiels that I've seen here have been the wild-type. However, I have also seen a few escaped Lutinos (completely light yellow and white Cockatiels with orange ear-patches).

Seeing escaped pet birds in the wild always makes me sad knowing all of the hardships and dangers that they may be unprepared to face. I hope that this one was eventually found and captured by someone or that he managed to meet up with the flock of Cockatiels that I'd seen.