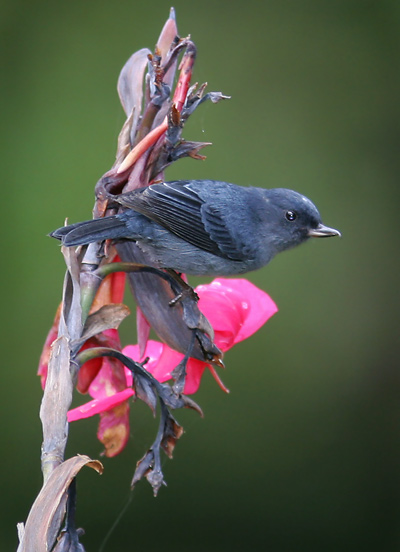 Slaty Flowerpiercers are quite small and have dark eyes and a distinctive upturned bill with a hooked upper mandible. The males are a slaty blue-gray color, while the females and the young are a dull olive-brown. 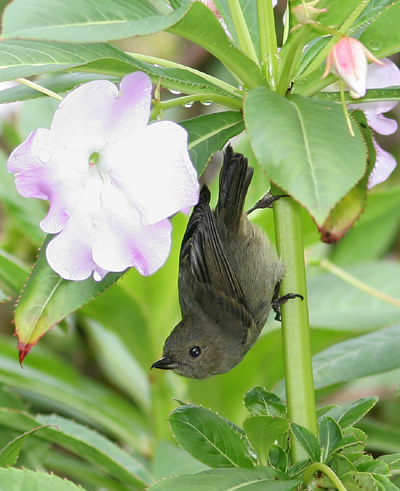 Although I observed these Slaty Flowerpiercers visiting a wide variety of nectar-containing garden flowers, they seemed to be especially fond of the pale pink flowers of the Oliver's Touch-me-not or Shrub Balsam (Impatiens sodenii), a large, non-native, cultivated shrub. Slaty Flowerpiercers are nectar robbers and approach a flower from behind, pierce a hole in the corolla, and then insert their brush-tipped tongue into the hole to extract the flower nectar, often without pollinating the flower. Flowers provide free nectar in exchange for pollination, so damaging the flowers to take their nectar without pollinating them is nectar theft. 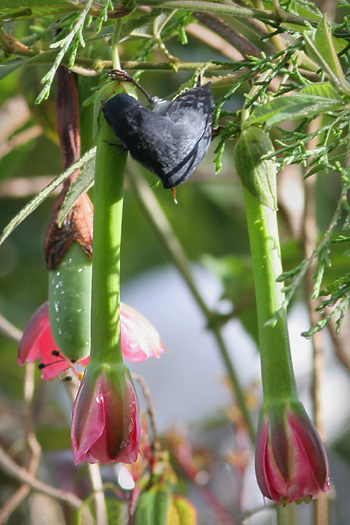 Slaty Flowerpiercers have good reason for their nectar-thieving ways though, not only are their bills too short to reach the nectar of many flowers using conventional means, the numerous and aggressive hummingbirds found in their mountain and cloud forest habitat also diligently guard many of these nectar-filled flowers and would attack any small bird using the direct approach to visit their precious flowers. Instead, the little Slaty Flowerpiercers fly into the center of a flowering plant and stealthily approach the flowers from behind while remaining hidden in the foliage. To also help avoid being noticed by any guarding hummingbirds perched atop the flowering plants, Slaty Flowerpiercers will often forage out of hummingbird eyesight low in the plant near to the ground.