Varied Buntings (Passerina versicolor) are uncommon summer residents (mid-May to mid-September) here in southeastern Arizona. They are generally uncommon here because they are unevenly distributed and rather localized, but in those specific areas where they are found, these birds are often quite common. Varied Buntings are primarily a Mexican species, but they can also be found here in the U.S. in southeastern Arizona, parts of extreme southern New Mexico, and in southwestern Texas.

In August of 2007 here in southeastern Arizona, I observed this male Varied Bunting along with many others along Forest Route 183 in Agua Caliente Canyon on the western side of the Santa Rita Mountains. 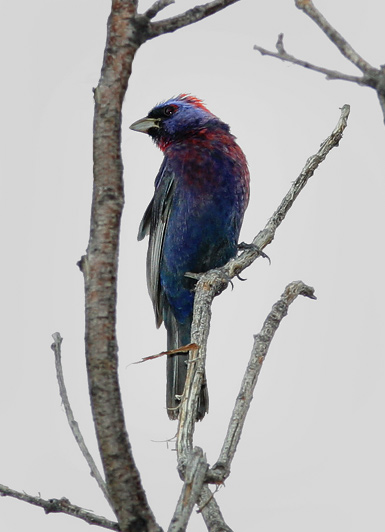 Unlike most birds in the Sonoran Desert, Varied Buntings breed here in the heat of the summer, usually sometime in mid-July after our summer monsoon rains have begun and the insects and seeds that they feed on are more abundant. At this time, the colorful males can be seen singing territorially from exposed perches at the tops of trees or Ocotillos (Fouquieria splendens), especially when the temperatures are a bit cooler, such as early in the day or when one of our frequent afternoon thunderstorms rolls in. We had heard male Varied Buntings singing in the dense brush all day there in Agua Caliente Canyon, but they didn't emerge until the temperatures dropped with the approaching storm. The inconspicuous females mostly remained hidden. 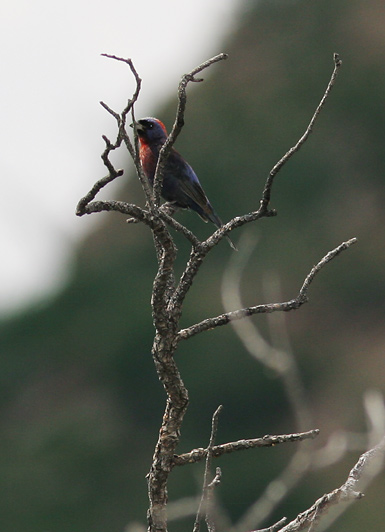 Varied Buntings are sparrow-sized and have a fairly broad, curved, gray bill and dark eyes. The females are a plain gray-brown with a darker brown tail and wings. Male Varied Buntings have black around the eyes and bill, a patch of red on the back of the head and neck, and are overall a dark purplish blue washed with red on the chest and back, which gives them a partly plum-colored appearance. Despite their rich, deep colors, male Varied Buntings often appear to be mostly black when seen from a distance or when they are out of direct sunlight in the dense brush they prefer.

Varied Buntings are found in areas of dense, tall brush in mountain foothill canyons, especially those canyons with seasonal streams. Given the many Varied Buntings I both heard and observed there, Agua Caliente Canyon in the Santa Rita Mountains is prime Varied Bunting habitat. 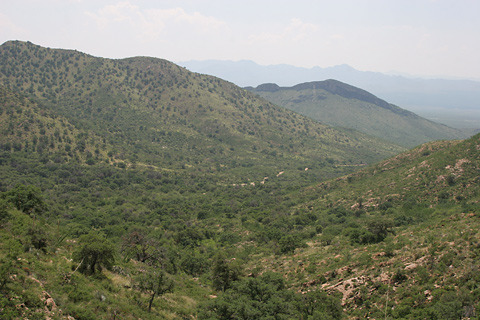 Agua Caliente Canyon has a great diversity of interesting plant and animal life, and it is one of my favorite places to visit in the summer despite the heat, bugs and abundant Mala Mujer (Cnidoscolus angustidens). This canyon even has a stream with waterfalls and a small swimming hole. 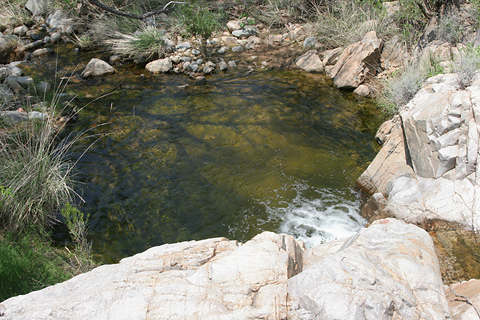 There are hiking trails in Agua Caliente Canyon, but we did most of our exploring off of the trail in the often thorny brush (wear long pants). I also recommend wearing insect repellant with DEET on your shoes, socks, and pants if you visit here in the summer or early fall when the chiggers are out. 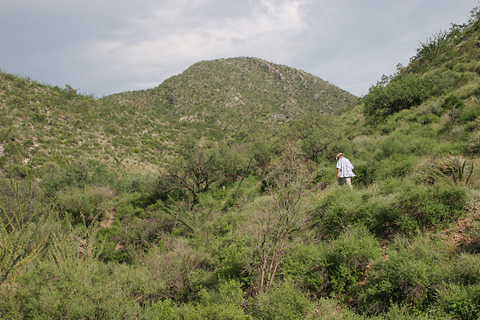 To reach Agua Caliente Canyon with its many Varied Buntings, take the paved Mt. Hopkins Road eastward and turn left on the dirt Forest Route 183 (the road to the KMSB Fox 11 television tower). This road is very rough in spots and crosses the stream, so it requires a truck or SUV.