With its 6-inch (15 cm) or greater wingspan, the Black Witch (Ascalapha odorata) moth is one of the largest moths found here in North America. Even though Black Witch moths are tropical in origin, normally ranging from Brazil in South America, through Central America, the Caribbean, and up into southern Texas and Florida, these tropical moths are strong-flyers and are occasional, seasonal vagrants to many other parts of the United States in the summertime. They have also been introduced to Hawaii. 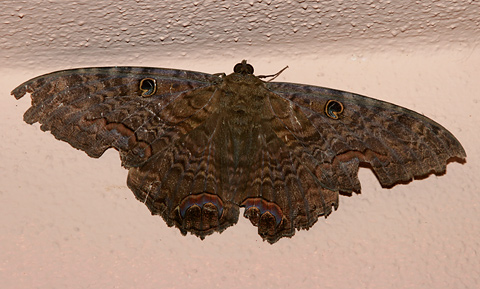 I observed this male Black Witch moth perched in a breezeway next to my house on August 14, 2007 here in Tucson Arizona. The recent weather had been humid, stormy, and tropical-feeling with summer monsoon moisture flowing up from the south in Mexico, and this likely helped push this migratory moth here to Arizona. 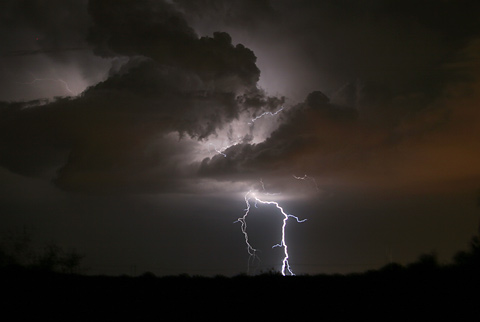 I've seen several huge moths and butterflies in the tropics, but I'd never expected to see a moth almost the size of my hand here in Arizona. These large, nocturnal, blackish brown moths can easily be mistaken for bats, and when I first saw this Black Witch moth, that was certainly my first impression of it. My second impression was that it was a large, dark, tropical butterfly, but it was sheltering under the shady eaves with its wings held open like a typical moth.

Black Witch moths have wavy-lined, blackish brown wings with long, pointed forewings, an eyespot on each forewing shaped like a comma or the number 9, and a faintly violet-edged spot on the bottom edge of each hindwing shaped like the letter "m". Female Black Witch moths have a median band of white, zigzagged lines across their wings. Since the one that I saw lacked such a band, it was easy to identify it as a male.

Interestingly, Black Witch moths have tympanic organs or ears that can detect the echolocation signals of insect-eating bats, which helps these moths avoid the bats that they so much resemble.

Like many other tropical moths and butterflies, adult Black Witch moths feed on soft, mushy, or rotting fruit and on other oozing, sugary fluids like tree sap. The larvae feed on the leaves of trees and shrubs in the Pea Family (Fabaceae).

In Mexico, the Black Witch moth is also known as the Mariposa de la Muerte (Butterfly of Death), and the superstitious belief there is that if one of these drably funereal, bat-like moths enters the house of a sick person, that person will die. Fortunately for me, this Black Witch moth stayed out of my house and no one inside was sick. Instead, the Black Witch moth remained motionless on the outside of my house all day and then with the fall of night, it finally took wing and disappeared into the dark.