Round-tailed Ground Squirrels (Spermophilus tereticaudus) are a common sight during the spring and summer here in the Sonoran Desert, especially during the summer monsoon rainy season. These small, ground-dwelling squirrels are quite active during the day despite the summer heat, and they remain active on all but the hottest of days. They spend their winters here in their underground burrows in an energy-conserving, hibernation-like state.

On a sweltering afternoon in July of 2007, I observed this Round-tailed Ground Squirrel gathering Velvet Mesquite (Prosopis velutina) beans along a roadway here in Tucson, Arizona. The busy ground squirrel was dragging the mostly whole mesquite beans (minus a few nibbled-off bits) down into its burrow. 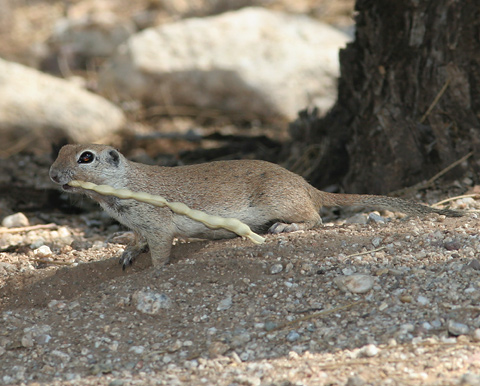 Like other squirrels in the genus Spermophilus, Round-tailed Ground Squirrels have internal cheek pouches that they use to hold and transport food to their underground burrows. 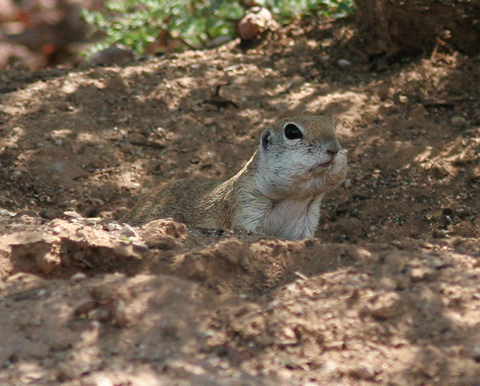 Round-tailed Ground Squirrels are social and live in small colonies with multiple burrows. Colony members will warn the others of danger with a loud whistled call, and they can often be seen standing on their hind legs for a better view or popping their heads out of their holes as they scan the vicinity for their many predators like coyotes, bobcats, hawks, and snakes. 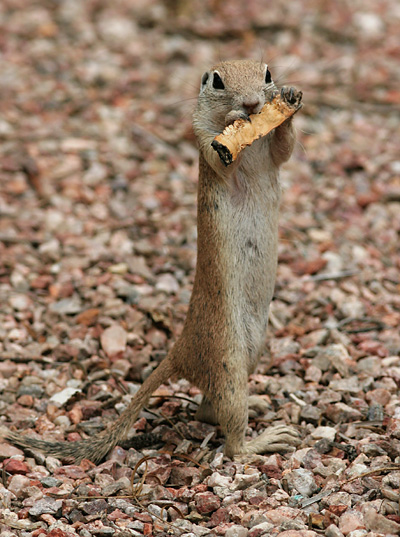 Since Round-tailed Ground Squirrels prefer more open, sandy areas of the desert, they seem to be attracted to partly cleared areas and to roadsides, where they have the unfortunate habit of darting out in front of cars. However, despite the many predators and dangers they face, Round-tailed Ground Squirrels do very well here in the Sonoran Desert and remain one of our most common ground squirrels.