Arizona Black Rattlesnakes (Crotalus cerberus) are almost exclusively found in the mountains and upland areas of Arizona, with only a small part of their population range extending into far west-central New Mexico. Near Tucson, Arizona, these snakes can be found in the Santa Catalina and Rincon Mountains, generally from the middle to high elevations. 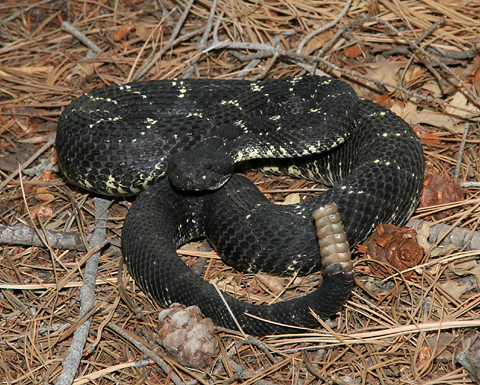 In July of 2007, we observed this adult Arizona Black Rattlesnake on a dirt road near Summerhaven, Arizona in the Santa Catalina Mountains at about 8200 feet (2500 m) in elevation. Rattlesnakes are quite common in the desert in and around Tucson, but this is the first one that I've seen high up in the mountains. There had been a devastating forest fire in Summerhaven in 2003, and blackened sticks and logs are a common sight there, so at first glance, I had thought that this black snake was just another bit of fire debris, but then the blackness moved and revealed itself as an Arizona Black Rattlesnake.

Adult Arizona Black Rattlesnakes can be up to 42 inches (107 cm) long, and these distinctive rattlesnakes are varying shades of black or dark gray. They have darker, saddle-shaped blotches interspersed with yellow to white crossbars along their back and light-colored rattles that contrast strongly with their overall dark coloration. Juvenile Arizona Black Rattlesnakes look more like our other Arizona rattlesnakes and are light gray with dark-edged brown blotches. The juveniles' color darkens to blackish as they age.

Like other Pit Vipers (Family Viperidae, Subfamily Crotalinae), Arizona Black Rattlesnakes are venomous and have a broad, wedge-shaped head much wider than their neck, large, erectable fangs that they use to inject venom into their prey or predators, and heat-sensing pit organs in front of their eyes that they use to detect warm-blooded prey like rodents and birds. 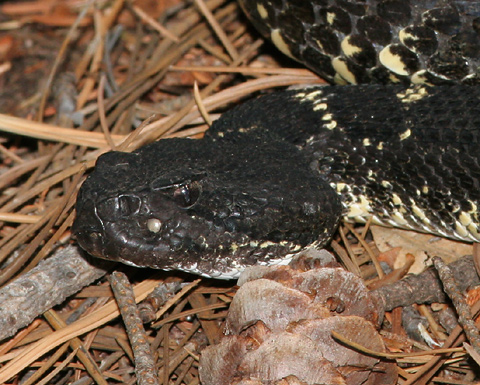 When threatened (such as by a close encounter with a human or other potential predator), rattlesnakes will often rattle their tails, producing a loud, dry rattling sound meant to warn the threat away. However, rattlesnakes will not always rattle, and this one certainly did not. Instead it coiled itself up into a tight, defensive coil, puffing itself up and arching its back to make itself look more threatening to us. 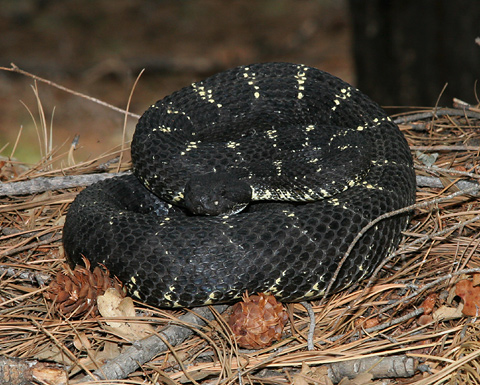 Not wanting to take any chance of being bitten, we weren't even that close to this unusually irritable and crotchety Arizona Black Rattlesnake, but then we weren't the only ones bothering the poor snake. A Yellow-eyed Junco (Junco phaeonotus) was both enraged and weirdly fascinated by this rattlesnake, and ignoring our presence completely, this cheeky and rather foolhardy bird kept flying down and landing near the furious, yet fearful rattlesnake. 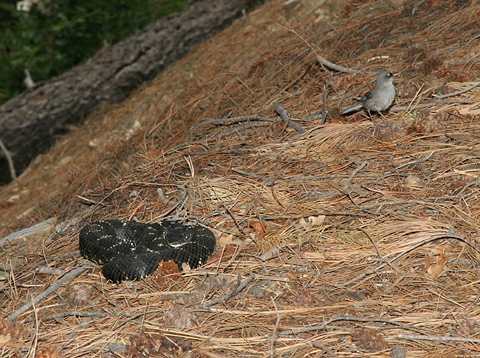 When on the ground near the rattlesnake, the Yellow-eyed Junco hopped and fluttered about in a strange, nervous, jerky fashion. 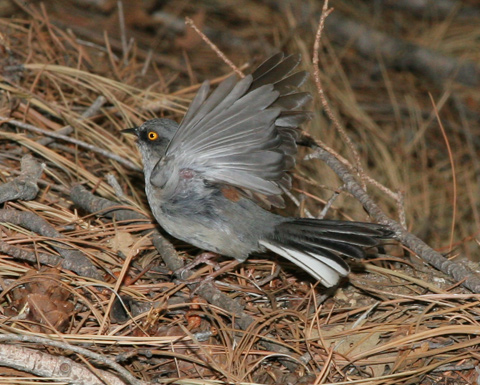 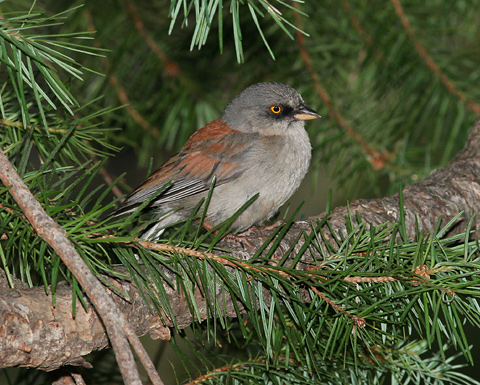 After we had gotten enough photos of the Arizona Black Rattlesnake, we tried to shoo it off of the road so that it wouldn't get run over or killed by a human. Not seeing any nearby long sticks that we could use, we tried what we discovered to be the completely ineffectual method of rolling a Douglas-fir cone at the rattlesnake in an attempt to get it to crawl away. Instead of crawling away, the furious Arizona Black Rattlesnake struck the douglas-fir cone fast and hard. Unfortunately, I didn't get a photo of the actual strike (it was just too fast), but the rattlesnake did strike a rather menacing pose after that. 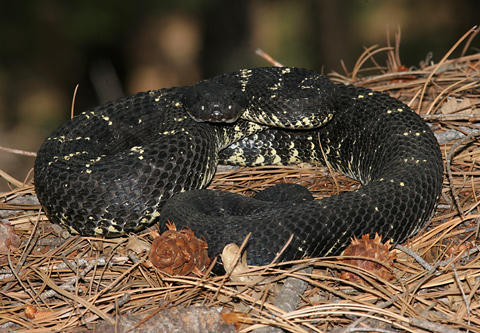 Since our Douglas-fir cones were just going to be bitten and wouldn't work to budge the rattlesnake, my dad then went off and found a long, semi-burnt branch and unceremoniously shoved the ungrateful Arizona Black Rattlesnake off of the edge of the road and back into the relative safety of the woods. Seeing that the rattlesnake show was over, the Yellow-eyed Junco decided to leave then as well.