Here in southeastern Arizona, Blue-winged Teal (Anas discors) ducks are uncommon autumn migrants and rare to uncommon spring transients at our lakes and ponds. I observed this pair of Blue-winged Teal and a couple of others at Tucson's Sweetwater Wetlands in late April of 2007. 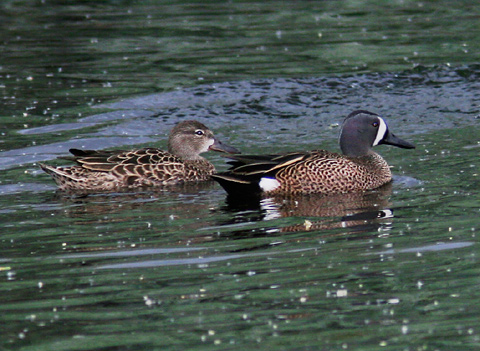 A male Blue-winged Teal is finely patterned or spotted with brown and has a black bill, a black rump, a white patch bordering the rump, and if he is in breeding plumage, he has a blue-gray face with a bold, white crescent between the eye and the bill. When not in breeding plumage, he has a brownish head. The female is brown with a large scalloped pattern on the sides, a black bill, a pale, discontinuous eye-ring, and a dark brown eye stripe. Both sexes have a large patch of sky blue feathers on the upper leading edge of their wings.

The blue-gray head of a male Blue-winged Teal in breeding plumage looks a bit more blue and less gray when seen in sunlight. Unfortunately, it was darkly overcast and thunder was rumbling in the far distance the day that I visited the Sweetwater Wetlands (a rare time that I had part of the day free this busy month).

Just moments after this photo was taken, the small flock of Blue-winged Teal nervously flew off before the thunderstorm stopped just distantly threatening and decided to zoom over to the wetlands and suddenly strike it with full violence. While I stood there unsuspecting, somehow these ducks could sense the storm's imminent arrival. I ended up fleeing the Sweetwater Wetlands at a full run (pulled along by my stampeding thunder-fearing dog Bounder) with rain drenching my clothes, hail bouncing off of my head, buffeted by the wind, and frightened by the lighting striking all around. I was not expecting a severe thunderstorm here in April!