White-winged Doves (Zenaida asiatica) are abundant here in southeastern Arizona during the spring and summer (mid-April to September). They will begin arriving as the weather warms in March to sometime in April when the main migratory wave arrives. Usually the first sign of their spring arrival is the sound of their distinctive "Who cooks for you?" call. 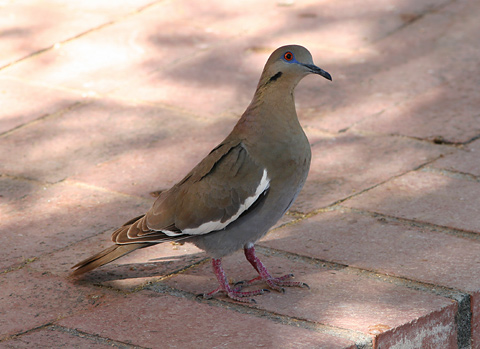 Although large numbers of these doves do migrate here to the southwestern U.S in order to breed, White-winged Doves are primarily a tropical species and most remain as year-round residents throughout Central America and parts of South America.

White-winged Doves are large and rather pigeon-like doves. They are mostly a soft gray-brown color with a black cheek line, red eyes, blue eye-rings, red legs and feet, a blunt, rounded tail, and large, white wing patches that show as white wing edges even when the wings are folded. The sexes are similar, but the larger males have a bit more faint neck iridescence. 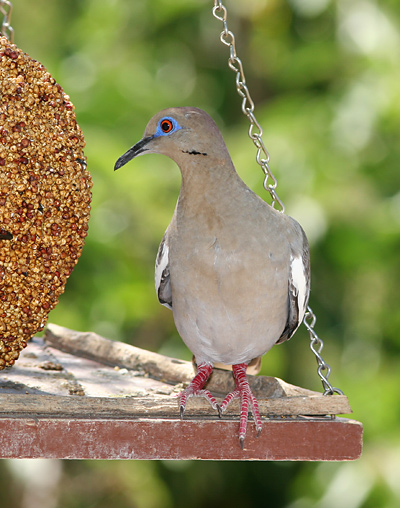 As soon as they arrive here in Tucson in the springtime, White-winged Doves will begin to swarm all over my quail seed block feeder, driving other smaller and less aggressive seed-eating birds away. Fortunately, my other bird feeders are dove-proof, as the numerous, greedy White-winged Doves would gobble down a fortune in the more expensive types of birdseed that I provide.