Just before the taxi arrived to take us to the airport for our flight out of Costa Rica, I spotted this shimmering blue Long-tailed Skipper (Urbanus proteus) butterfly darting from flower to flower in front of our hotel. 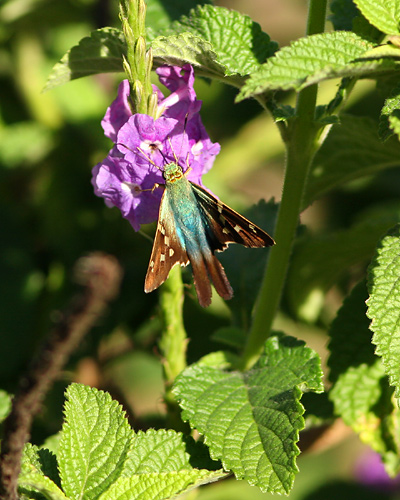 Long-tailed Skippers are best identified by their long-tailed hindwings, by the pattern of white squares on their forewings, and by the beautiful aquamarine iridescence on their dorsal wing surfaces. Their less colorful ventral wing surfaces are varying shades of brown. 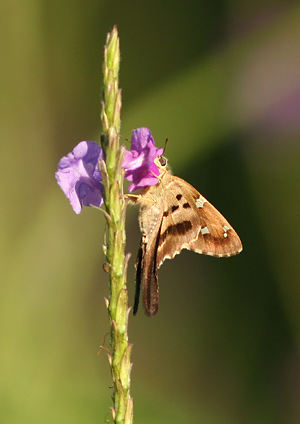 Adult Long-tailed Skippers feed on flower nectar, while the caterpillars, commonly known as Bean Leafrollers, feed on the leaves of various types of bean vines, unfortunately including cultivated species. A Bean Leafroller caterpillar will cut a section of bean leaf and fold it over itself to create a tent-like shelter. The edges of the shelter are held with webbing and the interior is lined with silk. The caterpillar is safe when it's inside its snug, little shelter, but it must leave it in order to feed.

Long-tailed Skippers are found in Central and South America and in the southern parts of North America.