Bronzed Cowbirds (Molothrus aeneus) are common here in Tucson during the spring and summer. Bronzed Cowbirds are mainly found in Mexico and Central America, but some of them migrate into the southwestern United States in order to breed. 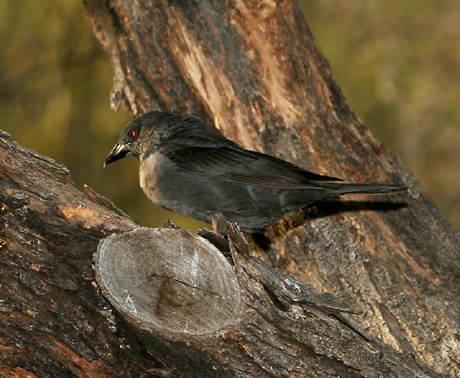 Even though he is not very black, this Bronzed Cowbird can be recognized as a male because of his red eyes and the ruff at the back of the neck that gives him something of a hunchbacked appearance.

Bronzed Cowbirds are brood parasites, and the females will surreptitiously lay their eggs in the nests of a variety of different bird species such as orioles (Icterus species). The baby Bronzed Cowbirds are then raised by their unsuspecting adoptive parents.