Wilson's Warblers (Wilsonia pusilla) are common in riparian areas around Tucson during spring migration (Mid-March through May) and during fall migration (Mid-August through September). 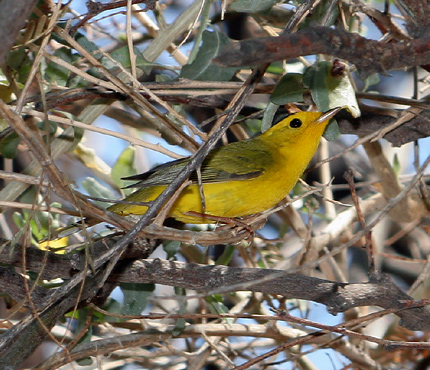 I observed this male Wilson's Warbler in the Sweetwater Wetlands last Saturday, and it was just one of the many migratory warblers I observed there. Wilson's Warblers are olive green above and bright yellow below. The males have a black cap on the top of the head, which can just barely be seen in the above photo.

Warblers are some of the most colorful of birds, but they are always on the move and usually hidden in the treetops, so capturing one with a camera is a matter of persistence and a great deal of luck. Fortunately, this one emerged from a dense tangle of shrubs just long enough for me to photograph him.