Great-tailed Grackles (Quiscalus mexicanus) are abundant permanent residents near water and in towns and agricultural areas here in southeastern Arizona. They are especially common in Tucson's Agua Caliente Park in the winter, where after a late afternoon bath, they will fly up into a bare tree to preen their glossy feathers and dry off before the chill of evening. 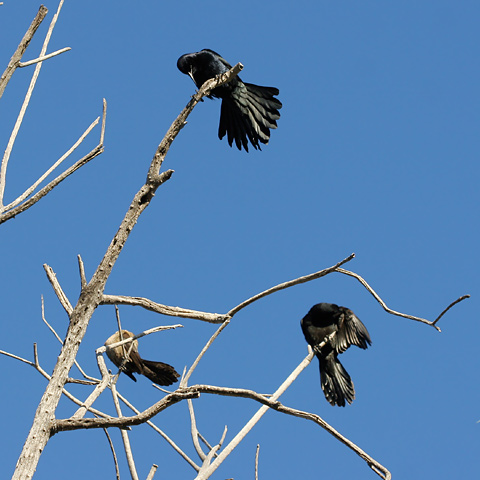 As they groom themselves, the Great-tailed Grackles will keep fanning their distinctive long tails and assuming all sorts of amusing postures. 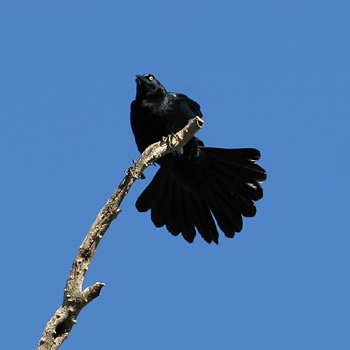 Great-tailed Grackles are quite common here in Tucson, mostly in areas like parks with irrigated lawns and water sources. In the winter, they can be found in large flocks, while in the breeding season, the black males will establish territories containing several brown females. 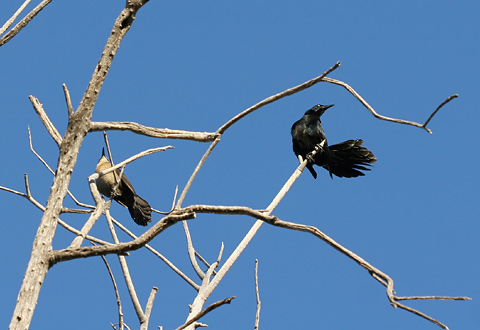 When they are establishing or maintaining their territories, the males are quite loud and conspicuous, and because their "songs" (squeaking, rattling, rusty screeching and such) are so dreadful, the males can be a bit annoying if they decide to spend the day "singing" in your yard. I have one male Great-tailed Grackle in my yard every summer, and some of his assorted noises are so loud and strange that they wake my dogs and send them outside to bark at all the noise. 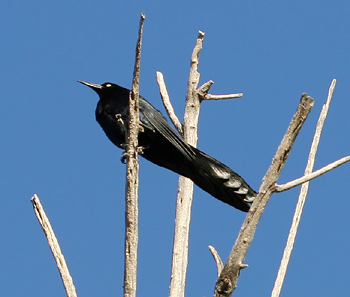 Besides being noisy, these large birds are also quite intelligent. The clever male Great-tailed Grackle in my yard will take the large dog kibble from my Gila Woodpecker feeder and drop it in a birdbath for a while until it is soft enough to swallow. Great-tailed Grackles are omnivores and besides dog kibble, they enjoy a wide variety of food, including invertebrates, plants and seeds, small fish, tadpoles, eggs and bird nestlings.

Great-tailed Grackles have pale yellow eyes, which are quite easy to see on the dark males. Their pale eyes can even be seen when they are looking straight forward. 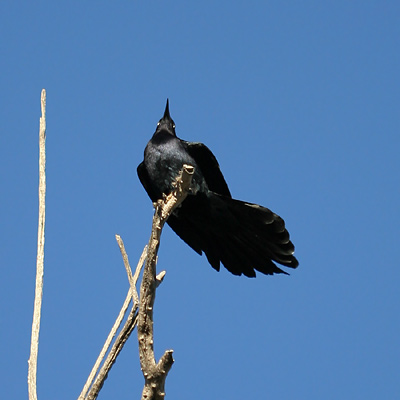 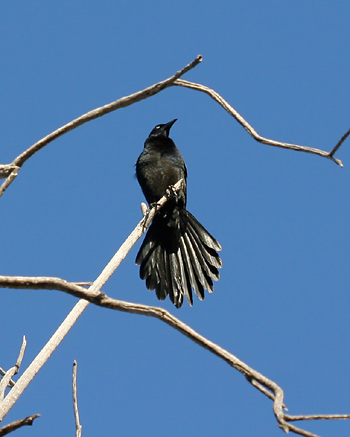 The Great-tailed Grackles' range is expanding northward from Mexico because these birds appreciate the ever increasing urban, suburban, and agricultural human habitats.