The Sonoran Spotted Whiptail (Aspidoscelis sonorae or Cnemidophorus sonorae) is a common lizard in the mountain foothills around Tucson. These small, slender lizards feed on insects, spiders, and other creatures smaller than themselves. 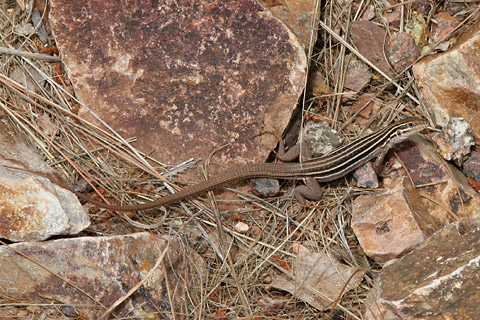 Sonoran Spotted Whiptails do have long, whip-like tails, but despite their name, they often have only very faint spots between the six pale lines running down their backs. 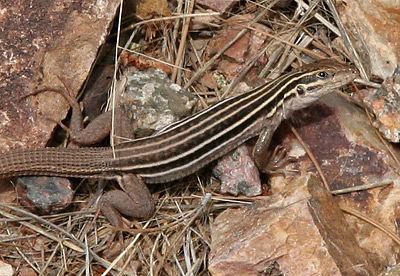 Sonoran Spotted Whiptails are all female and reproduce via parthenogenesis (virgin birth). A Sonoran Spotted Whiptail's eggs contain complete copies of her genome and will develop into embryos despite not being fertilized by a male. The resulting female offspring are all clones of their mother. While their reproduction is asexual, these parthenogenic lizards do exhibit sexual behavior and will sexually interact with each other depending on their fertility cycle.

A postovulatory female will assume the mating posture of a male, and a preovulatory female will assume the receptive mating posture of a female. Even though their reproduction is asexual, this mating behavior is actually important for their reproductive success because this pseudo-heterosexual mating behavior is accompanied by changes in hormone levels like those resulting from reproductive sex, and these hormonal changes stimulate ovulation. Isolated individuals prevented from mating with other females will ovulate eventually, but they ovulate later and less frequently.

For a movie showing two females of a similar species of parthenogenic lizard mating, check out this web page at the University of Texas at Austin.