I found an Osage Orange (Maclura pomifera) tree heavy with fruit growing along the nature trail in Agua Caliente Park here in Tucson. 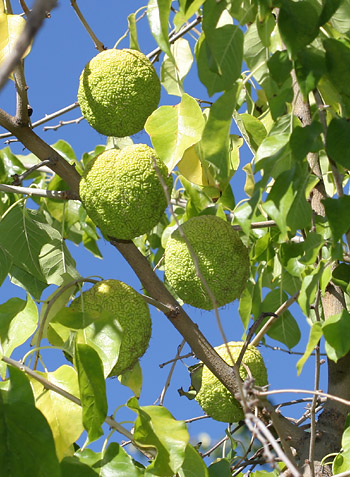 These trees are not native to Arizona and I was rather surprised to find one here. The ancestors of this Osage Orange were most likely planted in the 1800s when Agua Caliente was a ranch. Agua Caliente became a health resort in 1873 because of the supposed healthful properties of it's natural, warm springs.

Osage Oranges are native to areas of Texas, Oklahoma, and Arkansas, where their strong but flexible wood was used by Native Americans of the Osage Nation to construct superior hunting bows. Not only is Osage Orange wood one of the best bow woods, it is also highly rot-resistant and so makes excellent fence post material. Before the widespread use of barbed wire, Osage Oranges were used as natural, inexpensive, living fencing, and dense, thorny hedgerows of their interwoven branches formed impenetrable barriers along field edges. Thanks to human-aided distribution, these useful plants can now be found throughout much of the US. 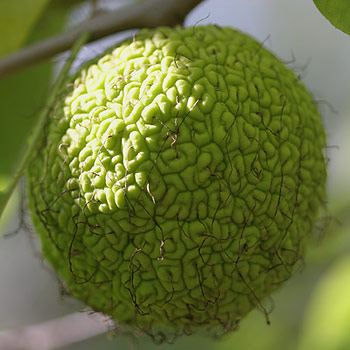 The fruits of Osage Oranges look like green oranges from a distance, but up close they look weirdly brain-like. Unlike oranges, Osage Orange fruits are quite inedible, and not only do they have a bitter taste, they will also ooze unappetizing white latex if cut. Osage oranges are not even members of the same family as oranges and other citrus fruits, instead they are members of the Mulberry Family (Moraceae).