In early September of 2005, my dad and I were roadside wildflower hunting (he drives while I keep a lookout for wildflowers) when we spotted a normally nocturnal Tarantula (Family Theraphosidae) inexplicably wandering out into the road during daylight. Luckily for the confused spider, this was near where we were planing to stop anyway, so my dad was able to get out and herd the Tarantula off of the road with a twig. The Tarantula was furious at this perceived attack, and it attempted to bite the twig, and when this failed to deter the offending twig, the enraged spider ran off at a surprising speed into the weeds at the side of the road. The Tarantula then nimbly climbed up into the weeds and defensively turned around to face us. 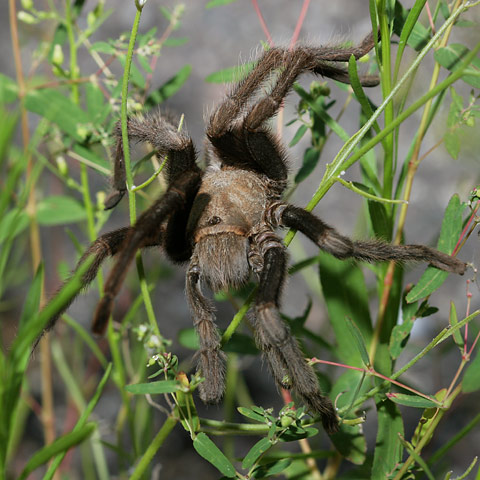 We left it alone after this, but the whole time we stayed there photographing wildflowers, the Tarantula crouched there in the weeds watching us and fully prepared to defend itself against another twig assault.