A herd of Collared Peccaries (Pecari tajacu) lives in my neighborhood. These pig-like animals are generally known as Javelinas here in Tucson. Javelina is from the Spanish word jabalina, which means javelin and is also the feminine of jabalí, a word derived from Arabic that means mountain (jabal) swine. 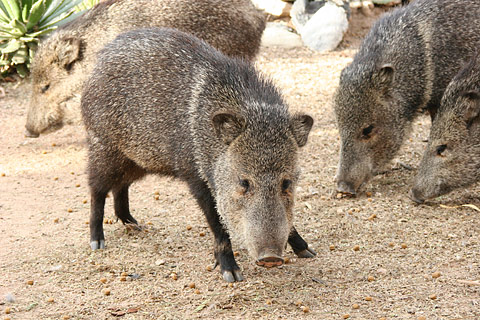 Javelinas, although pig-like, are not true pigs and instead are members of their own, unique family, Tayassuidae. Javelinas posses a scent gland on their lower back which releases a strong, skunk-like smell if they are alarmed. I can often tell that the herd has arrived in my yard by their powerful smell alone. Javelinas can be quite aggressive and will use their large canine teeth to defend themselves. Coyotes like to prey on baby Javelinas, but they wisely avoid healthy adults. 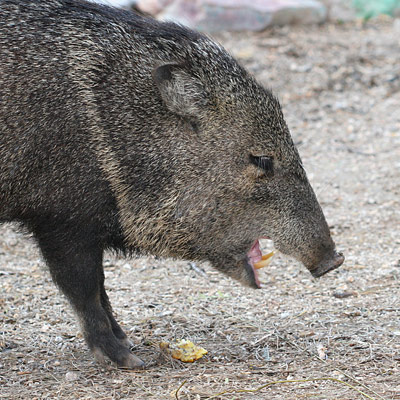 The Javelinas in my neighborhood have a pretty good racket going, feed them or they start destroying things, such as uprooting plants, rolling rocks around, tearing up hoses, and attempting to knock down fences. Gradually, they have been weaned from being fed in my yard, and now they just visit to get a drink or bathe in my bird pond or to eat the mesquite beans after they fall from a few, large mesquites in my yard.