On August 3, 2005 here in Tucson, Arizona, I left home in my car about sunset. It was just staring to rain heavily, and the setting sun shown through the rain, tinting everything sepia like in an old photograph. 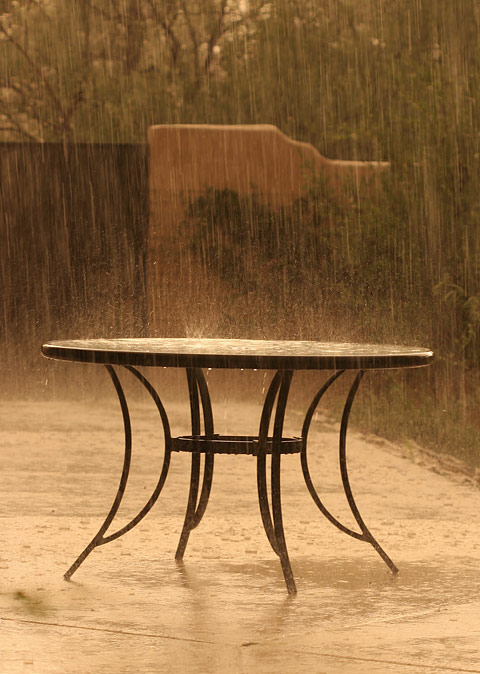 As I drove southward, the rain kept growing heavier and heavier, and soon pea-sized hail was pinging off my windshield. The wind began roaring, and it swept the rain sideways, drastically reducing driving visibility. So much water covered the road that I couldn't see the lane lines, and my car began hydroplaning at speeds above 25 MPH. Lightning was striking so close to my car that the flashes dazzled my eyes. After I had slowly crept through a flooding wash, I decided that it was just too dangerous on the road and I'd better return home.

As I looked back at the wash I had just crossed, I saw that the water had already grown visibly higher and frothy whitecaps could now be seen on it. Because this wash was no longer safe to cross, I decided to drive on, and it was a most terrifying (and weirdly thrilling) drive as I had to creep slowly along and cross numerous flooded washes, but I finally emerged safely beyond the southern edge of the thunderstorm. This storm's rain was so heavy and concentrated that I could see its edge, a solid gray wall of rain, when I looked back at the thunderstorm that I had just escaped.

Over 1 inch (2.5 cm) of rain fell in a matter of minutes from this storm. Here in the desert, with its dry soil and little ground cover, heavy rain quickly runs off, causing dangerous flooding and hazardous driving conditions. 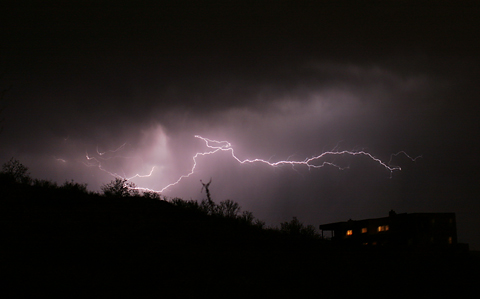 After this storm had dissipated, lightning still danced around the sky for hours afterward from other, more distant thunderstorms circling around the Tucson basin. Violent thunderstorms like this one are actually quite common here in Tucson during our summer monsoon rainy season.