Desert Spiny Lizards (Sceloporus magister) are very common around Tucson in areas with some natural vegetation. During the warm part of the year, males like this one can often be found performing territorial displays in prominent, highly visible locations like on tree trunks, in the middle of open areas, on roadways (an unwise choice), and on large rocks like this one. 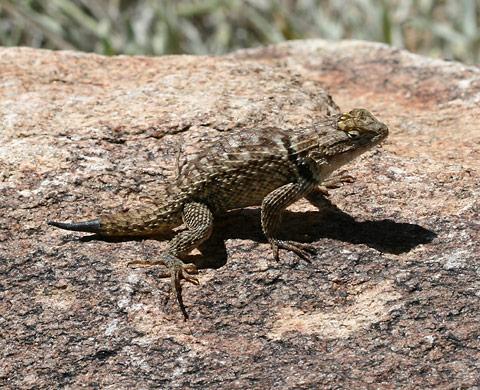 As part of their territorial displays, male Desert Spiny Lizards puff themselves up a bit, arch their backs, and then do a series of rapid push-ups. Some males, unlike this one, are more colorful, with blue-green markings on their throats and sides.

This particular Desert Spiny Lizard had either been lucky or careless and had lost his tail to a predator. The tails of many lizards will re-grow though, and a small, dark new tail can be seen growing from this lizard's tail stump. The tails of these lizards will detach easily if grasped by a predator, allowing the now tailless lizards to escape. A newly detached lizard tail will wriggle around for a bit, tricking the predator into thinking that it had caught it's prey and distracting it from the chase long enough for the lizard to escape.