Bastard Toadflax (Comandra umbellata) is a white-flowered wildflower that can be found growing at elevations above 4000 feet (1219 m) in the uplands and mountains around Tucson… Yes, Bastard Toadflax is the unfortunate but official common name for this plant. 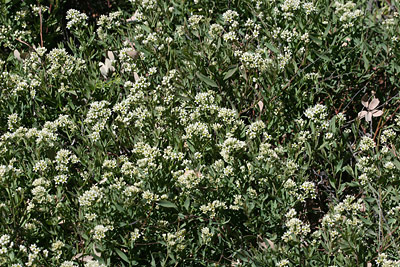 Bastard Toadflax is not a true toadflax, instead it's a member of the Sandalwood Family (Santalaceae). This plant may not deserve to be called a toadflax, but it is rather deserving of the other part of its common name given that it regularly steals from its neighbors. Bastard Toadflax is a hemiparasite, a root parasite of nearby plants. Its roots attach to those of other plants in order to steal nutrients and moisture from them. This is how Bastard Toadflax can afford to have such lush flowering displays and plump, green leaves even in harsh, dry weather, as shown in the above photograph taken after months of hot, dry weather.