During June of 2005, a family of Elf Owls (Micrathene whitneyi) spent their days in a dense hedgerow along the edge of my yard. Elf Owls seem to be rather tame, and I've been able to get quite close to them. 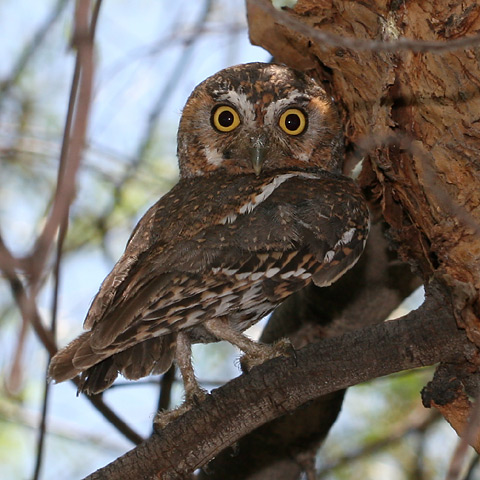 The Elf Owl is the World's smallest owl, and only two South American owls, the Long-whiskered Owlet (Xenoglaux loweryi) and Least Pygmy Owl (Glaucidium minutissimum), are of a similar size. Elf Owls are so small, about 5 to 5.75 inches (12.7 to 14.6 cm) long, that the only prey they can easily handle are insects, spiders, and other small arthropods. Elf Owls are quite vocal after dark and have distinctive, high-pitched yipping and chuckling calls.

On warm, summer evenings, these owls can be seen swooping around and about trees like bats, apparently hunting nocturnal insects on the wing. These owls also like to perch in trees near lighted windows at night where they can easily capture moths and beetles attracted to the light.

Because of their insect and spider diet, Elf Owls are migratory and only arrive in Tucson after the weather warms and insects emerge in the springtime, and these tiny owls will then depart for Mexico in the fall before cold weather kills off most of their invertebrate prey.