Coyotes (Canis latrans) are predatory animals and eat meat, but like dogs, they will also eat quite a few other things, such as mesquite beans (a frequent snack) and even birdseed as the photograph below shows. 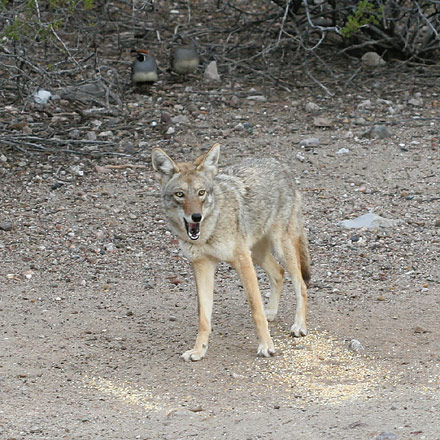 This female coyote ate birdseed in my yard while a pair of Gambel's Quail (Callipepla gambelii) waited patiently for their turn. The coyote kept making funny faces because she was probably getting more dirt than seed with each mouthful. She soon decided that the birdseed really wasn't worth it, and she stalked off, leaving the quail to their meal. 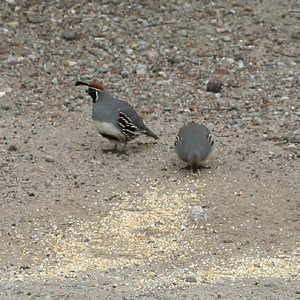 Coyotes will not waste their energy chasing healthy adult birds like these quail and will only give chase if they see any sign of weakness.

Once, I was walking my dogs when we saw a poor dove with an injured wing flailing about in the middle of the dirt road. My dogs were very excited and dearly wanted to catch it, so they lunged forward, pulling me toward it. Just then, a coyote leapt out from the bushes and snatched the dove away. My dogs were enraged at the sight of the thieving coyote and began barking madly and snarling with their hackles raised. Coyotes are quite intelligent, and this one saw that the leashed dogs weren't going anywhere, so it trotted proudly away down the road at a leisurely pace with its catch, and it kept stopping and turning around to look at the furious dogs as if to taunt them.