Iron Cross Blister Beetles (Tegrodera aloga) are large, brightly colored beetles with a black cross on their yellow back and a red head. Its bright coloring is a warning to potential predators because blister beetles (members of the family Meloidae) contain the irritating compound cantharadin that can cause skin blisters or severe to fatal poisoning if ingested. 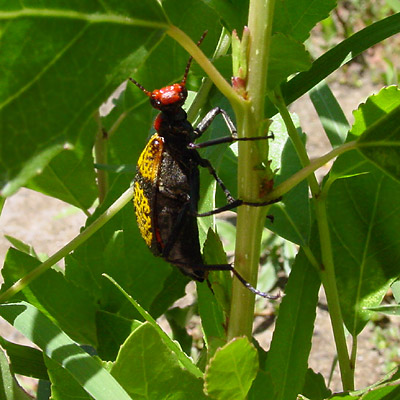 Blister beetles in harvested alfalfa have fatally poisoned horses. Dilute cantharadin "beetle juice" from another species of blister beetle has been used to treat warts. Spanish Fly beetles Lytta vesicatoria, like other blister beetles, contain cantharadin. Spanish Fly beetles were once dried and crushed into a powder that was falsely believed to be an aphrodisiac because it causes severe urinary tract irritation and painful priapism, among other symptoms of poisoning when ingested.